SINGAPORE - Singapore has not been spared China's covert "influence operations" and Singaporeans should be aware of when Beijing is trying to manipulate them, retired diplomat Bilahari Kausikan said on Wednesday (June 27).

These influence operations are aimed at swaying leaders and people abroad to China's positions, thereby advancing its interests and promoting its influence, said the former permanent secretary for foreign affairs.

In a keynote speech at a conference on Chinese public diplomacy, he outlined the approach and aims of China's campaigns and the tactics it uses in Singapore.

First, it explicitly rejects the norm of not interfering in another state's domestic affairs, seen in its belief that its interests should be promoted wherever they may be.

Second, China uses a range of tactics from legitimate diplomacy to more covert and often illegal deployment of agents of influence and operations to sway decision makers or public opinion leaders.

As countries want to keep diplomatic relations with Beijing on an even keel, they can end up overlooking or downplaying the subtler manipulation, he said.

Third, the aim of China's influence ops is not just to direct behaviour but to condition behaviour.

Mr Kausikan said: "China doesn't just want you to comply with its wishes, it wants you to think in such a way that you will, of your own volition, do what it wants without being told." 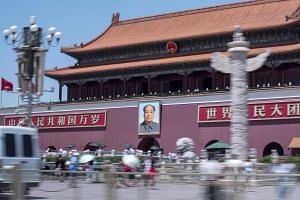 How to win friends the Chinese way: Spend US$48 billion in financial diplomacy, a US study finds

A key tactic is to present target countries with oversimplified narratives, "forcing false choices on you and making you choose between them", he said.

One such grand narrative is the idea that "America is the past and China is the future, so get on the right track", he said.

Others are that "America is inconsistent but China is a geographic fact in this region and will always be here so choose wisely", or that being close to America makes it difficult to have a close economic relationship with China.

Narratives deployed against Singapore included the idea that "Singapore has no claim in the South China Sea, so why is the Singapore Government taking sides against China?"

Another is that "relations were much better under Mr Lee Kuan Yew because he understood China in a way the present Singapore leadership does not".

These narratives are powerful because they contain kernels of truth, but are extremely simplistic and gross distortions, or leave out facts, said Mr Kausikan.

China, for example, conveniently neglects to mention that the late Mr Lee stood up to the Communist United Front, he said.

These narratives are spread through social media like WeChat and by word of mouth, and reinforced by actions such as militarisation in the South China Sea and the seizure of Singapore's Terrex armoured vehicles in November 2016.

While China's influence operations should not be underestimated, they also have weaknesses, said Mr Kausikan.

For example, influence ops among overseas Chinese communities in South-east Asia brings China into "extremely sensitive, in fact dangerous territory" and led to pushback against Beijing.

Also, once people are aware of influence ops being conducted on them, they are much less likely to fall for the manipulation, he said.

"When the Chinese try to impose a Chinese identity on Singapore, we must resist, because modern Singapore is based on the idea of being a multiracial country."