SINGAPORE - After Deputy Prime Minister Heng Swee Keat recovered from a stroke three years ago, various religious leaders went up to him at an inter-faith event to tell him that they had prayed for him to get well.

That they had done so, "regardless of race, language or religion", illustrates the state of religious harmony in Singapore, said Mr Heng as he recounted his experience at the inaugural International Conference on Cohesive Societies on Friday (June 21).

"I was so touched. This is something so precious in Singapore that we should really cherish, uphold and strengthen," he added on the last day of the three-day event at the Raffles City Convention Centre.

"I'm very glad that our religious leaders have been so committed all these years to promoting inter-racial, inter-faith harmony."

Mr Heng was speaking at a dialogue moderated by ambassador Ong Keng Yong, who is also executive deputy chairman of the S. Rajaratnam School of International Studies.

Harmony, said Mr Heng, depends upon people of different faiths, races and languages believing in diversity being a good thing, and recognising their shared humanity.

He added that the Government and religious and community leaders all have an important role to play in protecting Singapore's racial and religious harmony, as do all Singaporeans.

Elaborating on the Government's role, he said it had taken to task foreign religious leaders who have come to Singapore to preach, without understanding the religious context here, and made remarks about starting a crusade or performing jihad.

He added that the Government has also plugged a gap in the law, with the passage of the Protection from Online Falsehoods and Manipulation Act, to prevent the spread of fake news which has been used around the world to stir tensions between different religious groups. 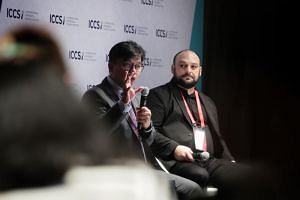 Reiterating his call for people to join the Government in building a democracy of deeds, he said when it comes to religious harmony, there are many things Singaporeans can do on their own.

He cited the example of a Muslim resident from his Tampines GRC constituency, who cooks for her neighbours every Hari Raya.

The woman, who used to run a restaurant but is now retired, would hold an open house for all the people in the neighbourhood.

Likewise, said Mr Heng, young people can do their part to promote religious harmony by taking a stand against intolerant and extremist views and speaking out online against derogatory remarks about other races and religions.

People can also promote dialogue and understanding by interacting with those of another faith and coming together to do volunteer work, he added.

"So we're not just waiting for a religious leader or government leader or the CEO of our company to tell us that we should promote racial and religious harmony.

"It is for each and every one of us to do our part," he said.

Mr Heng said major forces that are shaping societies all over the world will also have an impact on Singapore.

He said there are two things Singapore can do, given this global context.

First, it is important for Singaporeans to "stay cohesive and stay together as one community" by emphasising what they have in common, instead of accentuating their differences, he added.

Second, Singapore, though a small country, can do its part in the world, he said.

"By our own success, we hope that we can offer useful platforms for discussions with other leaders from around the world," he added.