SINGAPORE - Singaporeans are more likely to accept new citizens as being "truly Singaporean" if they are of the country's four core ethnic groups, but those of other ethnicities, such as Korean or Filipino, face greater difficulties being accepted.

This was one of the findings of a new Institute of Policy Studies (IPS) and Channel NewsAsia (CNA) study on ethnic identity and inter-ethnic interactions, released on Wednesday (Nov 8). It was based on a survey of about 2,020 Singaporeans and permanent residents conducted between May and July.

In contrast, respondents were less likely to accept new citizens who do not fall into the Chinese, Malay, Indian and Others (CMIO) framework, said the researchers in the study, led by Dr Mathew Mathews, a senior research fellow at the IPS.

Three in four respondents said they would at least somewhat accept those of Japanese or Korean ethnicity as being truly local, but three in five said they would do the same for those of Arab or African descent.

The findings on new citizens demonstrate that the CMIO framework has a part to play in associating national identity with the core ethnic groups in Singapore, the researchers said.

However, with a diversifying population, it may be important for Singaporeans to "become more amenable to persons outside the (core ethnic groups) also becoming part of the Singaporean core", the study reported.

That said, there was some silver lining: More Singaporeans identify with their country rather than their ethnic lineage. 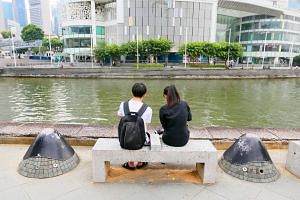 Some 49 per cent, however, said they identified closely with both their ethnic and Singaporean identities.

At a media briefing on Wednesday, Dr Mathews said the findings on new citizens do not imply that there is a need to dismantle the CMIO model, which has been in place since Singapore's first census in 1824.

"The whole intent of the CMIO model is not to separate people, (but to) make sure that different groups will be properly respected," he added.