SINGAPORE - Singaporeans can share their views on marriage and parenthood over the next few months through a number of channels, both online and offline, as the Government looks to encourage more people to have families.

Manpower Minister Josephine Teo, who oversees population matters, said that the National Population and Talent Division (NPTD) has set up a section on the Heybaby.sg website for people to submit suggestions on how to strengthen support for young families.

The website will also hold a series of monthly polls from Saturday (April 20) on topics relating to marriage and parenting. The surveys will run until August.

Speaking on Saturday at a People's Association event for parents in Bishan, Mrs Teo said that the Government has been supporting families through housing, pre-school and community and workplace support.

"Now what we want to do is to cast the net wider," she said, through the use of social media to get more feedback from the public.

"It won't be policies alone that make Singapore really a great place for families. Families want to feel supported, whether it is at the workplace or at recreational sports."

The NPTD, which coordinates and formulates government policies on population and talent and comes under the PMO's Strategy Group, will also be working with community partners and different segments of society such as youth, employers and parents to discuss and develop solutions through workshops and dialogues. 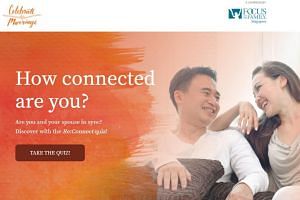 One such partner is the People's Association, which NPTD partnered in 2017 to start an Embracing Parenthood movement to celebrate the birth of new Singaporean babies and to support young parents.

Saturday's event in Bishan, which was attended by 39 families with babies born in 2018, was organised as part of the movement, which has reached out to about 60,000 families through events and house visits in the last two years.

Mrs Teo said: "The idea is to let parents know that their decision to become parents is celebrated, and the community is fully behind them."

Singapore's total fertility rate also dipped from 1.16 in 2017 to 1.14 last year, as young people are taking longer to find the right partner and starting families later.

Encouraging parents to press on in their journey of parenthood, Mrs Teo, who has a 21-year-old son and 19-year-old twin daughters, added: "The time will come when you really really wonder how come time passed so quickly... They kept us very busy, but there's also a lot of satisfaction."

She also urged parents to send in suggestions and their concerns. "We want you to tell us what's been going on, what suggestions you have, so that we can work on things that make a difference to you," she said.

Madam Charlyn Li, the mother of a boy who is seven and a half months old, said she hopes that more infant care places can be provided and companies can be more family-friendly.

The 35-year-old part-time financial adviser placed her son on the waiting list of childcare centres when she was pregnant as she had heard it was not easy to secure slots for infant care.

"We didn't manage to get into our preferred centre so my son is now in another centre farther away," she said.