Veteran diplomat Tommy Koh laments that Singapore is a First World country with Third World people. Many Singaporeans lack the civic-mindedness that citizens of an advanced country should have, he said yesterday.

“I am more critical of Singaporeans than of the Government. Many of our people don’t give a damn for the environment when they should. Many of our people are selfish and unkind. Just look at the way they drive,” Prof Koh said, drawing laughter from his audience.

He was at the Singapore Bicentennial Conference, organised by the Institute of Policy Studies.

Fellow panellist, Bloomberg News editor-in-chief John Micklethwait, pointed out that meritocracy has created its own problems, both in Singapore and other cosmopolitan capital cities. In such cities, the result is “a tribe of people who are working insanely hard to keep pushing ahead”, often pumping money and resources into their children.

“That is a very good thing for your children, but it means society gets a bit harder for others to catch up, and that is one of the dilemmas of a modern country,” he said.

The troubling conclusion his friend came to was that the guests, though from different parts of the world, had far more in common with one another than those living a block away from them. “He worried that his children only ran into poor people when they were delivering their Internet shopping,” he said, adding that societies must find a solution to be more inclusive.

He noted that companies used to practise profit-sharing, with a portion of the profit distributed to all employees at the end of the year, but this had been abandoned. 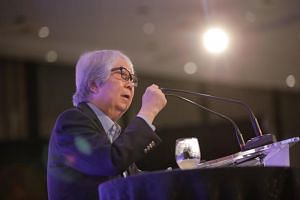 South-east Asia has always been diverse and must continue to accept diversity: Panel

Critical to forge a sense of unity among Singaporeans, says Heng Swee Keat

The average bus worker here earns a monthly wage of $3,600, he said. But the chief executives of the bus companies can be paid in excess of $1 million a year, with one paid between $1.75 million and $2 million a year. He asked: “Is this fair? Is running a bus company rocket science?

“There seems to be an obscene race in Singapore between our leading financial institutions and companies. The obscene race is to see who can pay the CEO more. So $7 million not enough; $10 million, maybe $20 million. Have they ever asked themselves what is the median income of the employees? What is the Gini coefficient of the company?” he asked.

Asked whether there is an alternative to capitalism, Prof Koh said the question to ask is what kind of capitalism Singapore wants.

Moral capitalism is where companies consider themselves accountable to not only shareholders but to wider society, where they care for the environment and employees, and champion gender  equality and diversity, he said.

He added that he had many ideas for Singaporeans, which he will write about in his next few columns for The Straits Times.