SINGAPORE - The rise in the ringgit against the Singdollar has sent demand for the Malaysian currency plunging at some money changers in Singapore.

Mr Mohamed Rafeeq, the owner of Clifford Gems and Money Exchange at Raffles City mall, told The Straits Times that sales of the ringgit are down about 30 per cent from three months ago.

"The ringgit is getting stronger, so people don't want to buy it... I'm hoping that it will get better," said Mr Rafeeq.

Malaysia's stronger trade performance and higher oil prices have helped lift the currency after a prolonged period of decline.

Mr Barakath Ali, the first vice-president of the Money Changers Association (Singapore), said: "We expect that the ringgit will either appreciate further or maintain its present level until the Malaysian election."

The general election must be held by August.

The ringgit was trading at RM2.99 to the Singdollar yesterday after 14 months of being comfortably above RM3.

Trader Danny Lee, who goes to Johor Baru at least once a month to eat, shop and get massages, said the strengthening ringgit would make him cut back on the number of trips.

"If the ringgit continues to rise, then it will not be worth the amount of time and money needed to travel to Johor Baru for food and shopping," said Mr Lee, 53.

However, not everyone is feeling the pinch. Malaysian Evelina Tan, who works in Singapore, said the strengthening ringgit has little effect on her.

"It doesn't impact me in any way because, after all, the conversion rate is still high," said Ms Tan, 26, an IT analyst. 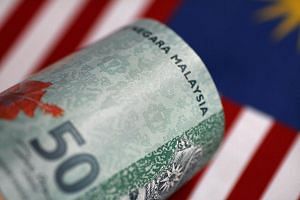 Malaysian ringgit continues strong trend against Singapore and US dollar

Mr Barakath, who also operates a money changing outlet at Sim Lim Square, said the store is seeing less business these days. But he attributes that to the post-Christmas and New Year holiday lull.

Even if the ringgit is pricier for those holding Singdollars, some people still see the need to do the exchange.

In Malaysia, the stronger ringgit is reason to cheer amid widespread complaints over cost-of-living issues as the country imports many goods - from Chinese vegetables to European fast fashion brands and Australian apples. A higher ringgit makes those imports relatively cheaper.

Said Ms Sherene Meetha Pillai, 31, a manager: "Since the ringgit is doing better now, I'm looking forward to getting good deals at the grocer."