Those aged 65 and older form 13.1 per cent of the citizen population as of June 2015, up from 12.4 per cent in the same period last year, according to a report released by the National Population and Talent Division on Wednesday (Sept 30).

"There are more citizens in the older age groups today as the 'post-war baby boomers' enter their silver years," said the report. The issue of an ageing society is one faced by other Asian countries, such as Japan. In Japan, those aged over 65 now account for 25.9 per cent of the population - the first time this group has exceeded a quarter of the total since 1968, according to its 2014 census.

To partially meet Singapore's manpower needs, Prime Minister Lee Hsien Loong announced at the National Day Rally in August that the Government will update the law to raise the re-employment age from the current 65 to 67 by 2017. 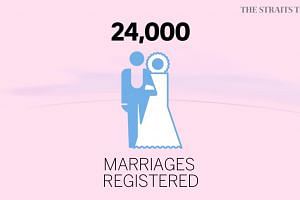 After the higher age ceiling kicks in, bosses must rehire healthy workers who have performed satisfactorily until they reach age 67, or give them a one-off payment.

To take care of the needs of the ageing population, the Government recently unveiled a $3 billion Action Plan for Successful Ageing, spearheaded by the Ministerial Committee on Ageing.

The five-year plan covers areas such as health, infrastructure, lifelong learning and even research, to ensure Singapore's greying population will be able to age well.

It includes initiatives such as subsidised classes and improvements to infrastructure so that the elderly can continue leading active lives.

For example, senior-friendly facilities will be made available islandwide. The Ministry of Transport, for instance, is planning to overhaul train, bus, pedestrian and road infrastructure in the next 10 years.