Acclaimed performance artist Lee Wen, best known for his Yellow Man series, died of a lung infection yesterday. He was 61.

The Cultural Medallion recipient, who also had Parkinson's disease, is survived by his wife, Japanese artist Satoko Lee, 57, and 19-year-old son Masatoshi.

Lee died at Alexandra Hospital surrounded by his family and members of the arts community.

Lee worked as a logistics officer, computer operator and bank officer before he quit his day job in 1987 to pursue art full time. He went on to enrol in the then Lasalle-SIA College of the Arts, and was also an early member of seminal artists' colony The Artists Village.

His Yellow Man series, which addresses cultural stereotypes, began in the early 1990s and includes works where he is featured stripped to his briefs and covered in yellow paint. His biographer Chan Li Shan noted: "At the heart of it was Lee Wen's dream of a society that overcomes stereotyping and superficiality."

In 1994, after an outcry over a controversial performance by another artist, the Government started a 10-year, no-funding policy on performance art events. But Lee continued practising his art despite this.

In 2005, he received the Cultural Medallion, Singapore's highest arts honour. In 2016, the US Embassy awarded him the Joseph Balestier Award for the Freedom of Art. 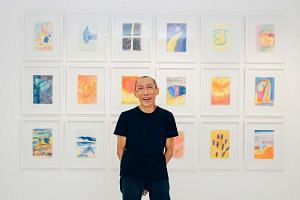 Recalled Ms Chan: "In typical Lee Wen fashion, he generously divided the prize money of US$15,000 (S$20,000) among the three nominees, saying that all of them deserved it equally."

Mrs Lee, who was married to him for 20 years, said: "He was the best husband... He was a great teacher."

Artist Vincent Leow, who knew Lee for more than 30 years, said: "I remember seeing him at the hospital (in December). He was struggling to talk, but he asked me to take out my sketch book so he could draw - he wanted to put his ideas on paper."

Lee's wake will be held at Block 145 Potong Pasir Avenue 2 from today until tomorrow. The funeral will take place on Wednesday.