SINGAPORE (THE NEW PAPER) - A Singaporean man was killed when his car skidded after a minor accident with a motorcycle and crashed into a water-filled road barrier at a bridge under construction in Kuala Lumpur, Malaysia, in the early hours of Saturday.

The incident occurred on the East-West Link Expressway near the Mid Valley Megamall around 3am, the New Straits Times reported online.

It is understood that the Volkswagen Passat grazed a Honda EX5 motorcycle, which led to the driver, identified as Mr Chua Zhijian, 37, losing control of the vehicle.

Mr Chua, a sales director who was said to be in Kuala Lumpur for work, died at the scene after the car slammed into the barrier at the bridge.

Rescuers found the Passat crushed and wedged underneath the iron frame of the bridge.

"The victim was pronounced dead by a paramedic team at the scene," said Assistant Commissioner Zulkefly Yahya, head of the KL Traffic Enforcement and Investigation Department. 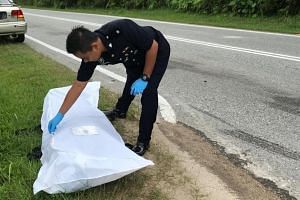 It was not mentioned if the car had passengers.

A spokesman for the KL Fire and Rescue Department operations centre said it received an alert on the accident at 3.09am and despatched 17 personnel in two vehicles from two stations to the scene.

AC Zulkefly added that the accident is being investigated, and the body was taken to the Universiti Kebangsaan Malaysia Medical Centre for a post-mortem.

When Chinese language newspaper Lianhe Wanbao went to Mr Chua's home on Saturday evening, no one was in.

A neighbour confirmed that Mr Chua drove a Volkswagen Passat, and that his older brother had left for Kuala Lumpur earlier that day to arrange for the body to be brought back to Singapore.

Several relatives and friends also showed up to offer their condolences and pay their respects to Mr Chua's family, Wanbao reported.

It did not give the location of the family home.

The neighbour, who declined to be named, added that Mr Chua leaves behind his wife and two sons aged two and three.

Noting that Mr Chua often travelled out of Singapore for work, the neighbour added: "One would not have expected something like this to happen."