SINGAPORE - The Singaporean man who has been implicated in terrorism-related activities in southern Philippines is believed to be still alive, said the Ministry of Home Affairs (MHA).

In response to queries from The Straits Times, a spokesman said on Tuesday (May 30) that Muhamad Ali Abdul Rahiman @ Muawiya has not returned to Singapore since he went to south Philippines in the 1990s.

The 52-year old Singaporean was named by MHA after the Philippine military's Brigadier-General Restituto Padilla told reporters last Friday (May 26) that foreign Muslim militants - including some from Singapore - are involved in the days-long clashes in Mindanao, where the death toll has exceeded 100.

MHA had earlier said that there was still no indication if he is involved in the ongoing armed insurgency in Marawi.

"We will continue to work with the Philippines authorities to identify any Singaporean who may be involved in terrorism-related activities in the Philippines.

"We take a serious view of anyone who supports, promotes, undertakes or makes preparations to undertake armed violence regardless of where the violence takes place," said an MHA statement last Friday (May 26). 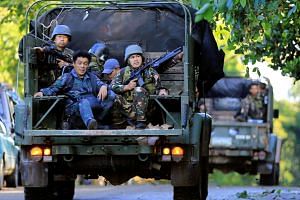 About a hundred militants seized large parts of Marawi, a mainly Muslim city of over 200,000, some 814km south of the capital Manila, on Tuesday (May 23), after security forces raided a suspected hideout of Isnilon Hapilon, named by the Islamic State in Iraq and Syria (ISIS) as its top man in South-east Asia.

The militants are believed to have subscribed to the ideology of ISIS and intend to create Mindanao as part of the caliphate, Solicitor-General Jose Calida told reporters at Friday's (May 26) conference.