When she found out that her husband was hurt in a crash in Malaysia last Wednesday, Mrs Lim, 63, immediately rushed to a hospital in Bentong, Pahang, with hopes of returning with him soon.

But he was more badly hurt than she had thought.

Accountant Lim Sia Thian, 62, suffered traumatic brain injuries after the Grassland tour bus he was in crashed into a road divider and overturned last Wednesday on the highway linking Karak, Pahang, and Kuala Kumpur.

The double-decker was travelling from Genting Highlands to Singapore. Its Malaysian driver and nine of its 12 passengers, all Singaporeans, were hurt.

On Sunday, Mr Lim succumbed to his injuries and died at Kuala Lumpur General Hospital at about 7am. He was transferred there last Thursday.

He had been due to be taken by ambulance to a hospital in Singapore that Sunday as his condition was said to have stabilised. 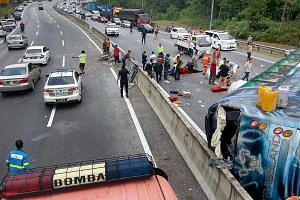 Speaking to The Straits Times at the wake in Block 106 Jalan Dusun yesterday, Mrs Lim said the family has accepted that it was an unfortunate accident.

"What happened was unexpected and beyond our control, but we have to move on. That would be what he would have wanted," said the retiree. Her husband was sitting in a front seat on the upper deck at the time, she added.

Mr Lim also leaves behind a son and a daughter, both in their 20s and studying at Nanyang Technological University.

Mrs Lim said he was a man of simple tastes who enjoyed visiting Genting Highlands to play jackpot or meet friends. She was unable to join him for the trip.

Mr Lim's brother-in-law, who gave his name only as Mr Ng, said the family has not discussed compensation with Singapore-based Grassland Express and Tours.

"It's not the most important thing on our minds now," said the 55-year-old, who is a regional director in a multinational company.

He added that he and his sister are grateful for the help from the Singapore embassy in Kuala Lumpur.

Another passenger, Mr R. Manokaran, a 52-year-old barber, remained in critical condition at Kuala Lumpur General Hospital on Sunday. He had a broken arm and wrist bone and punctured lung.

His family hopes he can be treated here, but doctors have advised against this, said his niece V. Chandralekha, 21, a student.

"Both his kidneys failed and he is on dialysis... His left ribs are mostly damaged and he has to be on breathing support throughout the ambulance journey."