SINGAPORE (THE NEW PAPER) - When signs of frostbite forced Mr Jeremy Tong to turn back when he was just 150 minutes away from the top of Mount Everest in 2017, the failure haunted him for two years.

Last Wednesday (May 22), the Singaporean co-founder of an adventure company laid the ghost of his failure to rest by conquering the world's highest peak.

Achieving this feat was anything but easy. Coping with freezing conditions and extreme exhaustion was par for the course for anyone seeking to conquer Everest.

But this time Mr Tong, 28, had to contend with another challenge - a human traffic jam causing a snaking queue of climbers on their final push to reach the top.

Mr Tong, who had to queue in total for a couple of hours and even at night, recounted a point where he was trapped in the single-file queue along a particularly treacherous part of the trail.

He told The New Paper over the phone in Kathmandu, Nepal, on Sunday: "If you fall, you will plunge 2km into Nepal on your left or the same height into China on your right.

"There was no room for error. You could easily fall to your death, your oxygen (tank) could malfunction or the weather could change - there were so many things that could have gone wrong."

Mr Tong, who has had this dream for five years, left Singapore for this expedition about two months ago, after his first child was born.

While it was difficult for him to be away from his newborn son, his thoughts of the baby helped him meet the challenges he faced along the way.

During his first attempt in 2017, Mr Tong had seen several dead bodies on his way up and understood that danger, and possibly even death, was part of the process.

"This year, more than ever, it was crucial for me to make it back down the mountain for my son and his future," he said.

Ten climbers have died on Everest so far this year, already the highest toll since 2012, which also had 10 deaths.

The sheer number of climbers trying to ascend and descend at any one time this year has been cited as a major cause.

A higher number of climbing permits was granted by Nepal, and with tight windows of relatively safe weather, many climbers ended up trying to get to the summit at the same time.

The bottlenecks on narrow trails caused many climbers to be stuck at a high altitude for extended periods, which is dangerous to the human body.

Mr Tong said: "It was frustrating because climbers move at different speeds, and there was only one way up.

"At night, when it's freezing cold and you have no food and are exhausted, it gets really frustrating to be not moving.

"Not moving in -40 deg C weather meant I was at risk of frostbite, so I kept flexing my fingers and toes.

"The only way to move or to leave the queue was to try to make a new path. At night, when you're so tired, one misstep and you could die." 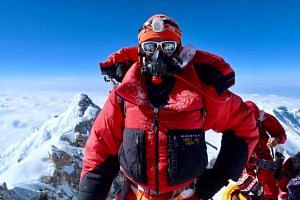 Mr Tong said the high number of deaths this year also affected him because he had known and climbed with some of the people who died.

He said: "Because I knew them, it affected me. We had been climbing together at some point. It was scary because you realise that it could have been you. There were so many things that could have gone wrong."

As in his first attempt, Mr Tong also made this climb for charity - he said he has raised about $11,000 so far for the Children's Cancer Foundation.

Climbing for cancer was meaningful for him, as his uncle had suffered from stage three nose cancer.

He said that hearing his uncle recount his battle to survive the disease had a profound effect.

Mr Tong also said that he saw parallels in fighting cancer and climbing a dangerous mountain in that it was a battle that could make the difference between life and death.

Mr Tong said that for much of his life, Everest was his goal, and he had put his life and career on hold when he was younger for this dream.

He said: "This has changed my life in many ways, and after five years of planning I have finally made it. I felt so relieved."

But the relief was short-lived because he then had to make the descent. From his final push from the base camp to the summit and back, Mr Tong had been walking for almost 30 hours non-stop in extreme fatigue and only 70 per cent visibility.

"I just can't wait to go home and pinch my son's cheeks. He has got so fat," he said.