SINGAPORE - Inuka, the first polar bear to be born in the tropics, is in declining health, Wildlife Reserves Singapore (WRS) revealed on Thursday (April 12).

The 27-year-old resident of the Singapore Zoo, which is run by WRS, went through a health examination on April 3 and results showed that it has a stiffer gait that is particularly noticeable in its hind limbs.

The abnormal shuffling gait has resulted in abrasions on its paw pads, while age-related muscle atrophy is clearly evident, WRS, said in a statement.

Inuka also has arthritis, dental issues and occasional ear infections, though they are already being managed.

Polar bears live an average of 25 years under human care, while male polar bears in the wild have a life expectancy of 15 to 18 years.

In the past three months, Inuka's activity levels have dipped noticeably, the zoo said, adding that "he now prefers resting to participating in daily interaction sessions with his keepers".

Inuka in his enclosure on April 12

The water-loving bear, which is known for its playful antics in the pool, has also significantly reduced its swimming sessions.

In addition, it has appeared less interested in its daily enrichment activities, such as those involving traffic cones, and ice blocks filled with its favourite food. 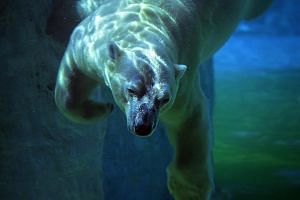 Following its latest health check, veterinarians have upped its daily care regime to include intensive treatment for its feet, WRS said.

Inuka has started taking specific painkillers and antibiotics to further alleviate its symptoms.

This is on top of the long-term glucosamine and anti-inflammatory treatment for its arthritis.

"His veterinary care team has given a guarded prognosis and are monitoring Inuka on a daily basis," the zoo noted.

"His keepers are closely monitoring his welfare, and his quality of life assessment is under constant review."

Inuka, who may be the zoo's last polar bear, is scheduled to undergo a second health examination in late April.

"If results indicate that Inuka's welfare is not improving with these intensive treatments, his care team may have to make the very difficult decision to not allow him to recover from anaesthesia on humane and welfare grounds," the zoo added.

Meanwhile, daily interaction sessions have been suspended to allow Inuka to "enjoy his time as he pleases".

Inuka is adopted by SPH Foundation, the charity arm of Singapore Press Holdings.

Polar bears first arrived in Singapore in 1978. Before Inuka, the Singapore Zoo was home to its parents Nanook and Sheba, and another polar bear Anana.

However, the zoo announced in 2006 that it will not bring any more polar bears to Singapore, following discussions with its Animal Welfare and Ethics Committee.