SINGAPORE - As the clock struck midnight, Singapore ushered in the new year with a spectacular seven-minute fireworks display at Marina Bay on Tuesday (Jan 1).

Revellers thronged the bay area despite the drizzle and cloudy skies to catch the festivities such as a striking fireworks musical at The Float @ Marina Bay, rides and games at the Prudential carnival, and live performances at the Esplanade Outdoor Theatre.

The show at the float culminated in an hour-long fireworks musical involving pyrotechnics, lights, and performance acts by Taiko drummers, dancers and fire performers.

It was the international debut of the Star Island production by Japan's top entertainment group Avex.

Over at The Promontory, visitors were treated to live performances by local artistes such as Taufik Batisah, Gentle Bones, and Joanna Dong.

Singapore Polytechnic student Lee Kian Tat, 18, had brought an umbrella and a towel after he was caught in the rain at the Gardens By The Bay area in 2017.

"I'm not deterred by the rain and will stay throughout for the shot I want," said Mr Lee, who studies visual effects and motion graphics.

Ms Nur Isha Tomeng, 30, was at the Marina Bay countdown for the first time with her future sister-in-law, Ms Khairiyah Rahman, 24, at 6pm.

Ms Nur Isha, a service crew in the food and beverage industry, said her wish for 2019 was to have her first child with her husband of seven years, as well as happiness for Ms Khairiyah, who will be getting married in November 2019.

The countdown celebrations at Marina Bay was organised by the Urban Redevelopment Authority, in collaboration with various agencies and event partners.

The area came alive even before New Year's Eve, with colourful light projections on landmarks such as the Merlion and the ArtScience Museum, as part of this year's focus on the community.

For instance, the facade of The Fullerton Hotel was illuminated nightly since Dec 26 with artworks by beneficiaries of the Association for Persons with Special Needs (APSN) and the Metta Welfare Association (Metta).

A police drone in the sky was part of the beefed up police presence for the event, together with about 700 police officers deployed, including officers from the Special Operations Command and Emergency Response Teams. 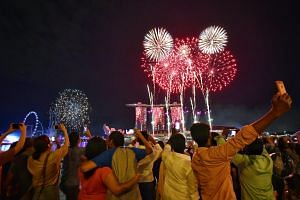 Eyes in the sky for Marina Bay Countdown

Sydney puts on dazzling 2019 fireworks, but gets the year wrong

The unmanned aerial vehicle featured blinkers, searchlights and an audio warning system. It provided a higher-plane view of the events for better crowd-control.

The Marina Bay celebrations was one of a number of countdown parties islandwide.

At Our Tampines Hub, some 100,000 people who attended the festivities were treated to a movie marathon, an 80m-long inflatable playground, and flame waves, laser and fireworks displays.

Another countdown event, at Heartbeat@Bedok, set a new Singapore record for "largest silent disco", with some 1,000 residents dancing while wearing wireless headphones.

Back at Marina Bay, tourist Sanjay Rajore, 61, a retired nuclear scientist from India, was attending his first countdown in Singapore.

He was here with his 61-year-old wife, a housewife, and two engineer daughters aged 24 and 33.

Mr Rajore said: "I chose Singapore to spend the New Year countdown as it's a beautiful place and a modern city. In the new year, I'm hoping to see more of Asia after my retirement in 2017."

After the countdown, more than 200 volunteers went around the Marina Bay and Civic District areas to remind the public to pick up their own trash.

They were from the Lions Club of Singapore Mandarin and National Environment Agency's litter-free ambassadors.

A Public Hygiene Council spokesman said: "The focus this year is more on engaging the public, and less on doing clean-up.

"The goal is to create a culture where everyone takes ownership of keeping public spaces clean. In so doing we create a better living environment for all."

The council, which coordinates the anti-littering effort, has stopped giving out figures for the amount of trash collected since 2017.