Singapore and the United States are exploring new turf in their relationship as they reach beyond the traditional domains of defence and trade to grasp opportunities in areas such as driverless cars, energy and cyber security.

Both Prime Minister Lee Hsien Loong and US Vice-President Mike Pence agreed yesterday that there were more ways for the two countries to work together, and there was much room to grow.

"Although our bilateral relationship is already comprehensive, we are still discovering new ways to cooperate, for example, in energy, advanced manufacturing and technology partnerships," PM Lee told reporters in a joint press engagement with Mr Pence at the Istana.

Mr Pence, who was on his first official visit to Singapore, arrived on Tuesday to participate in this week's Asean-US meeting and East Asia Summit on behalf of President Donald Trump.

After inspecting a ceremonial guard at the Istana yesterday, Mr Pence and his wife witnessed the naming of a new orchid hybrid, the Papilionanda Mike and Karen Pence, in their honour.

In a four-eyes meeting and in the course of extended discussions with their delegations over breakfast, PM Lee and Mr Pence reaffirmed the robust and enduring bilateral partnership and the importance of continued US presence in the region.

With help from their 15-year-old free trade agreement, two-way trade has touched US$75 billion (S$103 billion), with the US enjoying a surplus of US$20 billion.

The US is Singapore's largest foreign investor, while Singapore is the US' second-largest Asian investor. More American companies are basing new operations here, including Honeywell and Johnson & Johnson.

"Even Shake Shack is opening its first burger outlet in Singapore very soon. Which is the most important investment of all," PM Lee said, causing chuckles to break out among Mr Pence's aides and Singaporean Cabinet ministers. 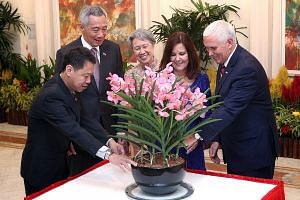 Asean wants to work with both US and China, says PM Lee, as Pence calls for Indo-Pacific free of 'empires'

Agreeing there is room for further cooperation, Mr Pence said in his remarks: "When it comes to our partnership and prosperity, we believe we still have much room to grow."

Expanding commerce in the 21st century requires safe and reliable digital access, he added, as he welcomed a new pact that will see Singapore and the US join hands to conduct three cyber-security training workshops annually in the city state and the region.

Other pacts signed will see new partnerships spring up in the energy, advanced manufacturing and technology sectors, and enable better tax compliance.

"We have also agreed to a two-year framework for a 'collaboration platform' that will deepen cooperation between our businesses on rapidly developing technologies, from 3D printing to driverless cars," Mr Pence said.

"This will benefit job creators and consumers in both our countries, and across South-east Asia."

The two leaders also affirmed the growing educational linkages between Singapore and the US, which will further strengthen people-to-people ties and foster mutual understanding.

PM Lee said: "I am confident that our strong and mature bilateral relationship will continue to strengthen at all levels."

At a time of peaking trade tensions between the US and China, more discussions on boosting economic growth are on the agenda as both leaders head for the weekend Apec summit in Papua New Guinea.

You’re welcome! Glad to return the warm hospitality that Karen and you showed Ho Ching and me during our visit to DC last year. – LHL 🇸🇬🇺🇸 https://t.co/iNN1iCda5f https://t.co/r89xyj6REd