RCEP can secure prosperity for members, it says, in a bid to assuage Delhi's reservations

Foreign Minister Vivian Balakrishnan has pressed India to keep the faith with "the mother of all trade agreements", which is approaching the final stretch of negotiations between Asean and its six trading partners.

India, however, has misgivings over pressing ahead. Meeting at the weekend in Bangkok to resolve the bottlenecks hobbling the deal, already six years in the making, Asean trade ministers said they hoped to seal it next year.

Dr Balakrishnan called the deal a "game changer" that had the potential to secure prosperity for its members in the face of a pushback against trade and globalisation.

"For India, China and South-east Asia, the key political question is: Can we arrive at a formula that would expand a rising middle class and give their children a sense of optimism?" he said yesterday, while trading views with his Indian counterpart Subrahmanyam Jaishankar at the India Singapore Business and Innovation Summit here.

Asked by Ambassador-at-large Tommy Koh, the panel moderator, to clarify whether India would join the other nations in crossing the finishing line this year, Mr Jaishankar outlined New Delhi's reservations.

India fears the deal, which would call for a lowering of tariffs, will lead to a flood of goods from China while not assuring India of equal access to the Chinese market, amplifying its US$57.86 billion (S$79.8 billion) trade deficit with the country.

"The big concern is that we run an enormous trade deficit with China, which we believe is a result of unfair, restricted market access," he said. Another worry, he said, is the weak regulatory protection for India's forte, its trade in services. 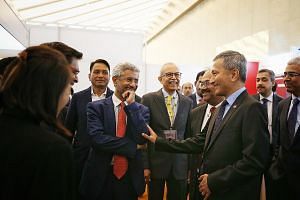 The deal ticked the geo-strategic objectives of holding the line on protectionist and unilateral policies, he agreed. Even so, it has to make economic sense, he said. "You can't sign a trade agreement for its foreign policy benefits. It has to be sold for its trade benefits. If that was more self-evident to India, it would get clearly a much stronger resonance."

Singapore, the largest foreign investor in both India and China, hoped the two Asian giants would eventually smooth over their differences, Dr Balakrishnan said. In the meantime, RCEP could be a boon.

"In the next decade or two, China and India are going to be in a significant trading relationship. This is something they will have to sort out. In due course, bilateral arrangements will be made," he said.

RCEP could become the centre of gravity in the Indo-Pacific, he added. "And if we can sort out the fair rules which will promote trade and economic integration between India, China and South-east Asia, there is enormous opportunity.

"I say all this without trying to gloss over the difficulties in negotiations," Dr Balakrishnan said. "It is worth making an effort because this will be a game changer... the mother of all trade agreements."

He said he remained optimistic the Narendra Modi government, re-elected with a handsome majority in May, would approach the deal from a position of confidence as it transforms the economy to meet the target of doubling gross domestic product to US$5 trillion by 2024.

Institute of South Asian Studies director C. Raja Mohan said he was not pessimistic about a deal, given that India and China are still thrashing out the terms of their trading relationship. "Mr Modi is keen not to let the region down," he said.

More than 1,600 visitors attended the summit that highlighted investment opportunities in India.