SINGAPORE - A major upgrade of Singapore's strategy to counter terrorism is in the works, at a time when the threat of an attack is at the highest level it has ever been.

CCTV coverage will be expanded considerably across the island, stringent measures are being studied for buildings and major events, and dedicated police emergency response teams will be formed to react swiftly to attacks.

Significantly, a new national programme called SG Secure will be rolled out to organise and train people to protect society from a terror attack and ensure that multiracial, multireligious harmony is upheld.

These measures to strengthen the nation's defences and - importantly - its social fabric will be put in place over the next few years, and were outlined by Minister for Home Affairs and Law K. Shanmugam in a speech to senior Home Team officers on Friday morning (March 18).

"The threat of a terror attack is at its highest level in recent times, much more so than after 9/11, and the arrest of Jemaah Islamiah members," he said.

"It is no longer a question of whether an attack will take place, but really, when is an attack going to take place in Singapore and we have to be prepared for that," he added.

His speech comes two days after the Home Affairs Ministry announced it had arrested four individuals - three of whom had taken up arms in Yemen and a fourth who planned to join a Kurdish militia fighting ISIS and engage in violence.

Last month, Singapore also detected and deported four Indonesians who travelled through its borders to establish a travel pattern, and who were later planning to join ISIS.

On Friday, Mr Shanmugam outlined how the threat from terrorism has morphed, with terror group ISIS posing "a far graver threat that Al-Qaeda and its affiliates ever were".

Authorities in Malaysia and Indonesia have arrested scores of people and foiled plots, and ISIS directed or inspired at least 56 attacks outside Iraq and Syria, many targeting civilians, last year. This year, supporters carried out attacks in Indonesia, Egypt, Turkey and the Ivory Coast. 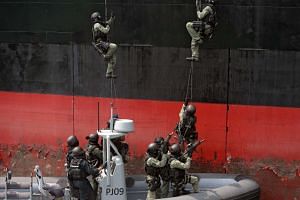 The terror group also seeks to establish a caliphate in South-east Asia that includes Singapore.

"There are multiple layers of threats in this region - complex, interwoven, fusing religion with domestic political grievances," he said.

"And we are in the middle, an oasis of calm and a prime target for all."

Singapore, he added, could see four possible types of attacks.

They could be planned just outside its borders like last November's Paris attacks; or involve weapons smuggled across borders by locals or foreign militants.

There could also be lone wolf attacks by radicalised persons, several of whom were detected in recent years; or foreign workers who get radicalised like the 27 Bangladeshis who were arrested and deported last December.

ISIS has also called on supporters to carry out lone wolf attacks, using items like knives, posing a nightmare for security agencies. These developments in the region and beyond have prompted the Home Team to review its strategies and strengthen them.

But this effort will need greater cooperation and coordination with the private sector and with people.

Police cameras, which will cover 10,000 HDB blocks and multi-storey car parks by year-end, will be expanded to common areas such as town and hawker centres, and walkways to MRT and bus stations.

Work will start later this year and be completed progressively over the next four years.

At the same time, police can make better use of other existing CCTVs, and will set up infrastructure to allow CCTV data in more areas to be accessible to police when needed.

New laws and regulations are also being studied to require building owners and organisers of major events to put in place security measures when needed.

Mr Shanmugam said these stepped up security measures will increase building and operating costs, but this cannot be avoided.

"We will all need to get used to more security and bag checks prior to entry. But I believe our people will understand and accept the need for these measures," he added.

On the policing front, new emergency response teams will be trained in counter-assault skills and equipped with the necessary weapons, while specialist teams from the Special Operations Command and Gurkha Contingent will be equipped to respond faster.

Critically, a key component of Singapore's counter-terrorism strategy is the community response.

On this front, the Home Team will develop and launch SG Secure to represent a national strategy to safeguard Singapore and its way of life in the face of the terror threat.

"Just as we have Total Defence, which involves every Singaporean playing a part for the defence of Singapore, SG Secure must become a rallying call for Singaporeans from all walks of life to unite, to play a part in making Singapore a safe place," Mr Shanmugam said.

This movement will train and mobilise residents, schools, workers, NSmen and community groups to be vigilant to prevent an attack, stay united and safeguard the social fabric when an attack happens, and stay strong to help one another recover from an attack.

The day after an attack is even more important, Mr Shanmugam said, citing how people in Paris and Jakarta sent a signal to terrorists that they were not cowed after recent attacks in those cities.

Social media users in Paris vowed to open their doors to strangers, while those in Jakarta said they were not afraid.

"We have to emerge stronger, more united and more determined as Singaporeans," he said.

"The terrorists wanted to spread fear and alarm and the population responds - we open our doors to strangers because they have nowhere to go; we tell the attackers that we are not afraid, we will fight back. That is what we need. We must have that same spirit in Singapore."