SINGAPORE - The future of food, medicine and digital technology has been earmarked as research targets to keep Singapore competitive in the long term, said Finance Minister Heng Swee Keat on Wednesday evening (March 27).

But these goals will not come at the expense of basic research, which takes longer to bear fruit, he added.

Giving an update on the Research, Innovation and Enterprise (RIE) 2020 plan for Singapore's science and technology research, Mr Heng said more than $500 million will be set aside to build up artificial intelligence systems and meet national cyber security needs.

The money will also boost the country's supercomputing capabilities and fund the deployment of robotics and automation.

Another $80 million will be invested in ramping up cell manufacturing capabilities for cell therapy, which has been hailed as the future of medicine.

And $144 million will go towards food research, including urban farming and lab-grown meat.

The funds are part of the $19 billion that was budgeted in 2016 under the RIE2020 plan for the next five years. 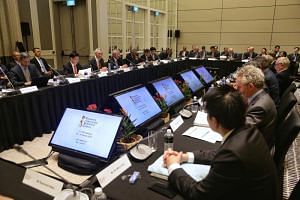 The success of Singapore's research efforts will depend on three factors, Prime Minister Lee Hsien Loong said. These are to emphasise science and technology in society, develop a strong core of talented researchers and entrepreneurs, and build international partnerships with foreign countries and institutions.

"We cannot afford to have people fearful and distrustful of science and held captive by totally groundless anti-scientific beliefs," he said.

PM Lee and Mr Heng, who chairs the National Research Foundation, were speaking to reporters after the RIE Council meeting, held on Tuesday and Wednesday at the St Regis hotel. The council was set up in 2006 to chart the direction for Singapore's research and development.

Also present were Trade and Industry Minister Chan Chun Sing and National Development Minister Lawrence Wong, who spoke on the changing face of manufacturing and urban solutions and sustainability.