SINGAPORE - Singapore's first training centre for young adults with Down syndrome which will teach them to live independently will open next month.

The pilot programme, which can accommodate 24 people, will teach trainees life skills such as financial planning, independent travelling, self-advocacy, communal living, cooking and other aspects of home economics.

While there are similar centres which support independent living for persons with intellectual disabilities, ILTC is exclusively for persons with Down syndrome who are at least 18 years old.

Down syndrome is a genetic disorder that impacts the physical features, intellect and development of an individual.

Trainees who are Singapore citizens will pay a fee of $250 per month and foreigners are charged $516 monthly. The Down syndrome Association has a financial assistance scheme for families who need support.

Mr Lee made the announcement in a speech at celebrations marking World Down syndrome Day, which is observed on March 21 globally to raise awareness of the condition. The theme of the celebrations was "Leave No One Behind".

Mr Lee said: "The reality today is that prevailing negative attitudes, low expectations, discrimination and exclusion contribute to people with Down syndrome being left behind. While there has been some progress made in awareness and acceptance of persons with Down syndrome, more needs to be done."

More than 800 people took part in the event at Our Tampines Hub, which included a mass walk and a carnival. The guest-of-honour, Education Minister Ong Ye Kung, flagged off the mass walk and also joined in the walk.

Parents of children with Down syndrome welcomed the announcement of the new training centre. 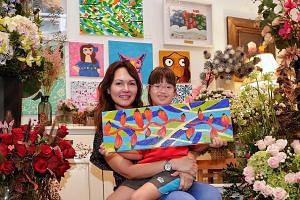 Natasha, who is homeschooled, knows algebra, history and science, said Mr Velez, who is married to a retired nurse. But he wants Natasha, the younger of his two daughters, to master life skills such as handling a budget, making a grocery list and coming up with a menu for a week.

"As parents, we tend to want to do such things for our kids (but) mum and dad will not always be there to help her," said Mr Velez. "This centre is something that we as parents of a child with Down syndrome have been looking for."

The training centre is still accepting applicants. Interested parties may contact the Down syndrome Association at 6500 9321 or e-mail alvin@downsyndrome-singapore.org