SINGAPORE - Singapore's skyline went dim for an hour on Saturday evening (March 24), as downtown landmarks like Gardens by the Bay, the ArtScience Museum and Singapore Flyer joined businesses across the island in switching off their lights for Earth Hour at 8.30pm.

Organised by the World Wide Fund for Nature (WWF), this year's Singapore edition of the global environmental movement is aimed at highlighting the island's high consumption and low recycling rates of plastic.

According to figures by the National Environment Agency, Singapore generated 815,200 tonnes of plastic waste last year (2017), only 6 per cent of which was recycled.

Organiser World Wide Fund for Nature Singapore estimated that some 15,000 people will attend over 10 days of events and activities including a marketplace, with many having pledged to reduce their plastic usage.

The countdown event at Marina Bay on Saturday featured performances by local artists such as Jack & Rai and the Jukuleles.

Said WWF Singapore's chief executive Elaine Tan: "We face an urgent global crisis on plastics - one that we as humans are responsible for. It is therefore heartening to see the multitude of people joining us at Earth Hour, welcoming greater action including support for government legislation on plastic." 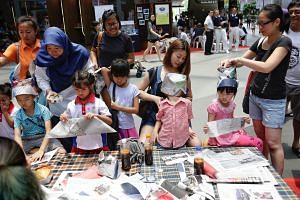