SINGAPORE - Although Singapore's scientific community has served the country well over the years, its members need to be "bilingual" in business, social issues and storytelling to ensure that the country continues to thrive.

The first type of bilingualism, said Minister for Trade and Industry Chan Chun Sing at the Leaders in Science Forum on Tuesday (Sept 4), involves marrying scientific outputs with industry.

He said that every time he meets the Agency for Science, Technology and Research (A*Star), he asks: "Have we done all we can to translate many of the good scientific output we have to connect the loop from research and innovation to enterprise?"

The Leaders in Science Forum is a platform for policymakers, scientists and industry professionals to share ideas on how technology and skills can promote economic growth and improve people's lives.

Speaking at the event at Biopolis, Mr Chan said that science also needs to be "bilingual" to touch the lives of the common man and, with the art of storytelling, to inspire the next generation of scientists.

Conversely, he said that government officials also need to be bilingual with science, so that they can make regulations more agile to allow Singapore to progress quicker than its competitors, though he did not specify which laws.

Nanyang Technological University (NTU) president Subra Suresh, in his keynote address, said research showed that many jobs would be destroyed in the next few decades because of the fourth industrial revolution, and new professions need to be created in time to halt the massive disruption this would cause. 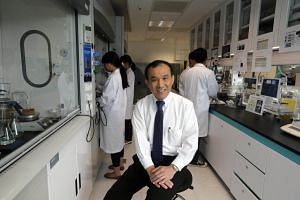 "Technology is moving much faster than society's ability to comprehend, and for governments to put in guidance and rules. We have a lot of catching up to do," he said.

In further comments to The Straits Times, Prof Suresh said, for example, there is a need to develop ethics frameworks for biotechnology and insurance policies for autonomous vehicles.

He said that Singapore is much nimbler than many other countries in preparing itself for this industrial revolution through government initiatives such as SkillsFuture, which gives Singaporeans the chance to upgrade their skills.

When asked how likely it was that jobs would be destroyed in Singapore more quickly than they would be replaced, he said: "It's hard to predict, but... I think that many things are already being done here.

"For example, besides SkillsFuture, NTU has offered our alumni the chance to come back and take courses that they want to learn. These are examples of proactive steps."