Last year, both countries further expanded bilateral cooperation across several pillars of their strategic partnership, as well as launched cooperation in new areas including fintech and innovation.

"I am confident that relations between our two nations will continue to strengthen in the years to come," she said.

India marked its 70th Republic Day in an annual display of culture and military might, with South African President Cyril Ramaphosa as the guest of honour.

Mr Lee attended the event last year, together with nine other Asean leaders.

In sending his warmest congratulations to India, Mr Lee, in his letter to Mr Modi, noted that India has achieved great strides in its development as well as on the international stage. 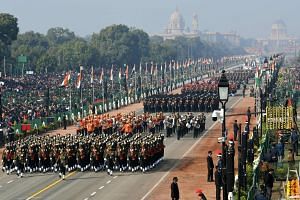 "The longstanding friendship between Singapore and India continues to expand with each passing year. Your two visits to Singapore last year gave strong momentum to our Strategic Partnership, especially in new areas of cooperation such as FinTech and innovation," he said.

He also said the conclusion of the Second Review of both countries' Comprehensive Economic Cooperation Agreement in June 2018 provided a conducive framework for their agencies and companies to strengthen trade and economic linkages.

Moreover, the launch of the Third Review in September last year reflected the two countries' mutual commitment to enhance their partnership amid a rapidly changing world, added Mr Lee.

"These initiatives and our many other cooperation platforms will bring Singapore-India relations to greater heights."