SINGAPORE - The Republic of Singapore Navy (RSN) signed two bilateral agreements with the Royal Thai Navy (RTN) and Philippine Navy (PN) on Sunday (May 14), said the Ministry of Defence on Tuesday.

The MOU formalises both navies' cooperation in maritime information-sharing, which includes the deployment of a PN International Liaison Officer at the RSN's Information Fusion Centre.

The two agreements were inked on the sidelines of the International Maritime Defence Exhibition and Conference (Imdex) Asia, a biennial maritime defence trade fair.

They reflect the deepening of practical cooperation between navies, which is necessary as countries need to work together amid an increasingly complex and crowded seascape, said Senior Minister of State for Defence and Foreign Affairs Maliki Osman on Tuesday (May 16). 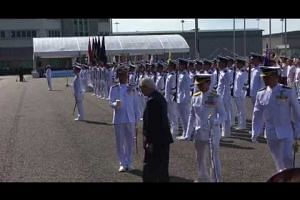 Speaking at the International Maritime Security Conference (IMSC), he said countries need to work together and abide by international agreements and codes of conduct to avoid unintended conflicts at sea.

This includes abiding by the existing United Nations Convention on the Law of the Sea (Unclos), an international agreement that helps preserve order and stability at sea, he added.

Under Unclos, coastal states are granted Exclusive Economic Zones that allow them to control the economic resources up to 200 nautical miles in their patrimonial sea, while allowing other states the freedom of navigation and to conduct military activities, among others.

"If any country tries to cherry-pick and restrict the use of such freedoms based on their own interests, it will risk Unclos and the global rules-based order falling apart, and threaten the peace and prosperity that our region has enjoyed over the past decades," said Dr Maliki, at the IMSC, which is held in conjunction with Imdex Asia.

However, he added that even with Unclos in place, the seascape is turning more complex and crowded.

He highlighted how territorial tensions still persist in the East and South China Seas, and also noted the importance of strategic cooperation between US and China for stability in the region, especially as both countries have stepped up naval deployments in the region.

Navies in the region are also increasing their capabilities, he added, with defence spending in Asia set to increase by 23 per cent by 2020 and the number of submarines operating in the Pacific expected to increase from about 200 last year to 250 in 2025.

"In such an environment, there is a need to work better with each other, abiding by mutually agreed rules and codes of conduct, to avoid unintended confrontations and accidents at sea," said Dr Maliki.

To address these challenges, Dr Maliki suggested that states should work on building trust by engaging in dialogue and maintaining open channels of communication.

This includes attending regional frameworks such as the Shangri-La Dialogue, forums like the Western Pacific Naval Symposium, and sharing maritime information among countries.

"Without trust, promises of cooperation would merely be superficial lip service," he said.

These practical efforts will help to deepen trust among nations, and keep the seas safer and more secure against non-traditional maritime threats such as terrorism and piracy, he said.