Singapore must treasure the racial and religious harmony that it enjoys, said Prime Minister Lee Hsien Loong, citing how race and religion have sadly become divisive fault lines in many other countries.

"We must treasure the harmony that we enjoy, and never let that happen here," he said in a Facebook post yesterday.

"We worked long and hard to arrive here, and we must work even harder to preserve this peace for future generations," he added.

He noted that schools have been commemorating the occasion with students and teachers dressing up in ethnic costumes, putting up skits and recalling the shared history of interracial relations.

"Such scenes are unique to Singapore - we embrace our diversity and celebrate each other's customs and cultures, but also remember the times when tensions between the ethnic and racial groups boiled over into conflict and violence," said PM Lee.

Deputy Prime Minister and Finance Minister Heng Swee Keat also called on Singaporeans to "never take our precious racial harmony for granted". He posted photos yesterday of celebrations at a PAP Community Foundation (PCF) Sparkletots kindergarten on Friday, where many children were dressed in traditional clothing.

Mr Heng noted that while such scenes are delightful, harmony is about much more than what is worn on the surface. 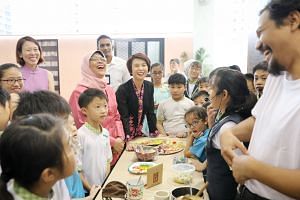 Duty of older generation to remind the young of need for social cohesion: President Halimah

"It's really about the respect for one another that we carry inside us, and the ways we behave to show that," he wrote in his Facebook post.

Racial Harmony Day remembers the race riots of 1964, and is an affirmation of the nation's commitment to being a society where all races and cultures can live in peace and harmony, he added.