He hopes to see that 20 years from now, so Govt can continue to plan for the long term

In 20 years' time, Emeritus Senior Minister Goh Chok Tong would like to see the political party governing Singapore have a "clear majority" of seats in Parliament.

"I believe that the party in charge must have a clear majority of the seats, meaning - off the top of my head - 75 to 80 per cent of seats, then they come across as a strong government," he said, when asked what he hopes Singapore's political landscape will look like in 20 years.

Mr Goh was speaking to Chinese daily Lianhe Zaobao in an interview published yesterday, ahead of next month's launch of the Chinese-language edition of his biography, Tall Order: The Goh Chok Tong Story.

By the estimate he gave, the opposition should take up 20 per cent of parliamentary seats in future.

Mr Goh hopes to see "intelligent, constructive, critical opposition" that can challenge the Government. "Then you have a real debate," he said.

He added that he does not see the opposition's role as one of "check and balance", as that means the Government is not doing things right.

Mr Goh made the point that should the ruling party have a majority of only one to two seats, the Government will not dare to plan ahead and take long-term actions. "It must begin to worry about the next election," he said.

By the estimate he gave, the opposition should take up 20 per cent of parliamentary seats in future. Mr Goh hopes to see "intelligent, constructive, critical opposition" that can challenge the Government. "Then you have a real debate," he said... He does not see the opposition's role as one of "check and balance", as that means the Government is not doing things right.

The People's Action Party (PAP), which Mr Goh led when he was prime minister, won 83 of 89 seats at the 2015 General Election.

As to whether Singapore's political system has to be changed to achieve his envisioned political landscape in 20 years' time, Mr Goh said he does not think so.

"We have done what we could to stabilise the system," he said, referring to "stabilisers" such as the group representation constituency system and Nominated Members of Parliament.

During the wide-ranging interview, he was asked about "groupthink" in government, given that many PAP ministers come from the public service.

This issue is a big worry for him, Mr Goh said, as he set out why it is increasingly difficult to attract talented people from the private sector into politics. He also said the number of public servants willing to enter politics will decrease, adding that already, quite a few have said no when approached.

"Fortunately - and people laugh, you know - I say fortunately, we have the SAF generals," he added. 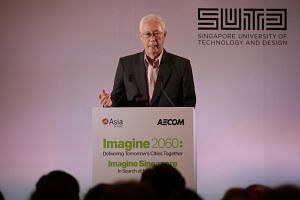 These former generals are "good material" for politics as they understand the importance of defence, security and nation building, he said.

But if a "bulk of them" is from the Singapore Armed Forces (SAF) in Cabinet, groupthink is "very dangerous for us", he added.

"Diversity means having people from the SAF, civil service, private sector and social sector... (That way), you'll have a diversity of views," he said.

Asked if he had any regrets, Mr Goh said his real regret was the dispute his Government had with former president Ong Teng Cheong.

Mr Ong had clashed with the Government over what information he was entitled to regarding national assets that made up the country's reserves.

"We did not quite understand each other's thinking and needs," Mr Goh said, noting that he had initially left it to civil servants to handle Mr Ong's complaints.

"Had we worked the system a bit better, I think we could have avoided that. Put it this way, the presidency ended on a sour note because of that exchange."

His proudest moment? Handing over the premiership to Prime Minister Lee Hsien Loong.

Mr Goh said that after the PAP won the 2001 General Election, he knew that he could plan his handover to PM Lee sooner rather than later. Singapore was "in very good shape" when founding Prime Minister Lee Kuan Yew handed the premiership to him, Mr Goh said.

"Likewise, when I handed over to Lee Hsien Loong, (the country) was in good shape. That was my proudest moment. I had done my job."

A version of this article appeared in the print edition of The Straits Times on May 27, 2019, with the headline 'Singapore must have strong ruling party with clear majority: ESM Goh'. Subscribe
Topics:
More
Whatsapp Linkedin FB Messenger Telegram Reddit WeChat Pinterest Print Purchase Article Copy permalink