Muslims here will have a new religious leader from March 1, when Mufti Mohamed Fatris Bakaram, 49, retires after nine years in office.

On that day, Dr Nazirudin Mohd Nasir, 43, who is currently deputy to Dr Fatris, will take over as the Mufti, who is Singapore's highest Islamic authority and oversees key religious rulings for Muslims here.

The change was announced yesterday by the Islamic Religious Council of Singapore (Muis), which noted that Dr Nazirudin has already been making significant contributions in supporting the Mufti to advance religious policies.

Dr Nazirudin will be the fourth Mufti in Muis' history, and the second-oldest one appointed.

Mr Murat will oversee religious policies, while Dr Hannan will be in charge of the development of religious teachers and the curriculum of Islamic schools.

In a statement from Muis, Dr Fatris said he decided to step down to make way for new blood to lead the community. He noted that it was his responsibility to develop the next generation of devotees and religious leaders.

"I am happy to see through the development of the next generation of religious scholars in Singapore with a good mix of knowledge, training and experience, who are ready to take over from me and guide Singaporean Muslims in their religious life," he added.

During his term as Mufti, Dr Fatris led the development of pro-gressive religious policies and programmes to strengthen the next generation of Islamic scholars and teachers.

According to Muis, this included further developing the Asatizah Recognition Scheme, a national accreditation programme for religious teachers that requires them to abide by an ethical code and which includes efforts for their continual professional education.

During his tenure, the scheme became compulsory in 2017. 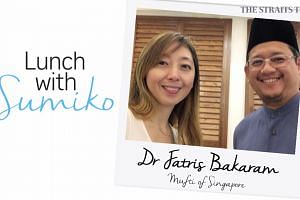 Lunch With Sumiko: When the going gets tough, Mufti Fatris Bakaram writes poetry

Registrar of Muslim Marriages to step down after 14 years in the post, deputy to take over

Muis said Dr Fatris will continue to serve the community as a senior associate member of the Fatwa Committee, which decides Singapore's religious rulings.

He will also chair the Al-Quran Steering Committee, which promotes the understanding of the holy Islamic text, and will continue to mentor and guide Muis as well as younger religious teachers here.

Dr Fatris, who holds a master's degree in education from the International Islamic University Malaysia and a doctorate in Islamic studies from Birmingham University in Britain, is known for his early contributions towards education in the community, starting his career as a teacher at Madrasah Aljunied in 1993.

Dr Nazirudin, who has a PhD in theology from the University of Oxford, helped Muis develop policy in fatwa development and religious teacher training. Of his new role, he said he was deeply humbled by the appointment, and thanked Dr Fatris for his guidance, promising to further advance the work of his predecessors.

In a Facebook post yester-day, President Halimah Yacob thanked Dr Fatris for his service, and underscored the need for leadership change.

She said: "Leadership renewal is important to ensure these institutions remain strong and responsive to the needs of the Malay/ Muslim community.

"On a larger scale, our community leaders also play important roles in promoting peace and social cohesion within our society by building our social trust."

A version of this article appeared in the print edition of The Straits Times on January 10, 2020, with the headline 'Singapore Muslims to have new Mufti from March 1'. Subscribe
Topics:
More
Whatsapp Linkedin FB Messenger Telegram Reddit WeChat Pinterest Print Purchase Article Copy permalink