Datuk Seri Azmin and Singapore Foreign Minister Vivian Balakrishnan said they had a "productive" meeting where they held an "open and candid" discussion of the issues facing the two neighbours.

Both ministers posted on Facebook photos of them taking a walk together along the Singapore River on Sunday (Jan 13).

Dr Balakrishan wrote: "Had a good meeting of minds over dinner with Malaysian Minister of Economic Affairs Dato' Seri Azmin Ali this evening. Took a stroll along the Singapore River too.

"We had an open and candid discussion of the issues currently confronting us. We reaffirmed that there are far more opportunities for Malaysia and Singapore to work together, especially at this time of global economic transformation."

"Productive meeting with HE Dr Vivian Balakrishnan, Singapore Minister for Foreign Affairs, this evening as we work towards resolving some bilateral issues. Maintaining strong ties between Singapore and Malaysia is in the best interests of both.

"We are each other's closest neighbour connected by deep historical ties and family bonds. Let's work things out for the well-being and future of our people.

"I am confident of the positive approach taken by our two countries to overcome any bilateral issues. Looking forward to my meetings with Singaporean ministers tomorrow," Mr Azmin wrote. 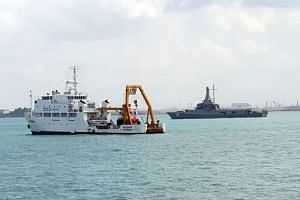 In a Facebook post on Monday, Mr Khaw said he and Mr Azmin talked about the deferred Singapore-Kuala Lumpur high-speed rail.

"Had a good chat with Minister Azmin Ali! He is in town to meet old friends. Naturally, we talked about our common project, the deferred High Speed Rail between KL and Singapore.

"He is aware of the unnecessary disputes at Tuas and Seletar. We share a common desire to bring bilateral relations back on track, so that good projects, like the RTS Link between Woodlands and JB, can materialise, to benefit both our peoples. So much time is wasted by so many Malaysian workers at the Causeway, daily! My Woodlands residents too would like to see Causeway jams disappear.

"Appreciate the time taken by HE Lawrence Wong, Singapore Minister for National Development, to meet over breakfast this morning. We had a frank and positive discussion on bilateral issues concerning Singapore and Malaysia," Mr Azmin tweeted.

Appreciate the time taken by HE Lawrence Wong, Singapore Minister for National Development, to meet over breakfast this morning. We had a frank and positive discussion on bilateral issues concerning Singapore and Malaysia. #MEA pic.twitter.com/BaX1vM8CMn

Responding to media queries on Sunday, Singapore's Foreign Ministry revealed that it had sent a protest note to the Malaysian government last Friday over the intrusion by Datuk Osman.

It added that the intrusion created an atmosphere "unconducive" for holding the meeting, which led to a decision by Singapore - agreed to by Malaysia - to postpone it.

The JMCIM was set up in 2007 to study how the two neighbours can work together in the South Johor economic zone of Iskandar.