JOHOR BARU - Singaporeans will be able to hop on an MRT train in Woodlands to cross the border to Johor Baru by Dec 31, 2024.

The Rapid Transit System (RTS) Link can carry up to 10,000 passengers an hour in each direction between Johor's Bukit Chagar terminus station and the Singapore terminus in Woodlands North, where it will join the upcoming Thomson-East Coast Line (TEL).

It is slated to greatly improve transport connectivity between Singapore and Malaysia, providing an alternative option for reducing congestion at border crossings.

The new starting date for the line was announced in a joint statement on Monday (July 31) after the 13th meeting of the Malaysia-Singapore Joint Ministerial Committee for Iskandar Malaysia.

The meeting was co-chaired by Coordinating Minister for Infrastructure and Transport Minister Khaw Boon Wan and Malaysia's Minister in the Prime Minister's Department Abdul Rahman Dahlan.

Officials have agreed to jointly appoint an operating company to run and maintain the cross border line's operating systems, which include its trains, tracks and signalling system.

Both operators are negotiating terms for the joint venture, which will have a first concession period of 30 years.

Each government will also appoint an infrastructure company to fund, build, own, maintain and upgrade the civil infrastructure and stations in their own countries.

The daily shuttle train service from Woodlands train checkpoint to Johor Baru will cease operating after the RTS Link opens. Currently, it runs 26 daily trips since June 1 to cope with higher demand, and both countries are looking to increase the frequency is number further.

The joint ministerial committee is expected to sign a bilateral agreement on the cross-border service by the end of this year. 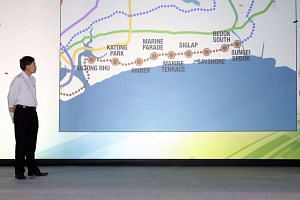 Second phase of study on MRT extension to Johor

First announced in May 2010, the RTS Link's initial target completion date was 2018.

It will use the same rail systems and rolling stock as the 31-station Thomson-East Coast Line (TEL), which will open in phases from 2019 to 2024.

US conglomerate GE has been appointed to supply the signalling system and platform screen doors for the TEL, while Singapore Technologies Electronics will provide the communication systems for the line, including video surveillance and travel information systems.

Trains will ply between both terminus stations via a high bridge across the Strait of Johor.

Officials also discussed the Kuala Lumpur-Singapore High Speed Rail line which will be ready in 2026, and noted that an industry briefing held earlier this year on an upcoming tender for an assets company "was well received, signalling continued strong interest from the market on the project". The tender will be called by the end of this year.

Officials also welcomed the upcoming signing of a memorandum of understanding to establish Sungei Buloh Wetland Reserve and Pulau Kukup Ramsar as "sister wetlands". In addition, a joint programme will be launched later this year to attract more visitors to both nature sites.

On immigration, officials noted that more than 676,000 applications have been approved for the Malaysian automated clearance system as of June 30.

The Singapore Immigration & Checkpoints Authority's BIKES II programme, which allows pre-registered motorcyclists and their pillion riders to scan thumbprints and have their passports verified by a machine, has been fully rolled out since January with 164 counters at Woodlands and Tuas checkpoints.

A similar automated immigration clearance programme from Malaysia - M-BIKE- has seen 128,145 users register as of July 15. The system has been implemented at all 100 lanes at the Causeway checkpoint, and at 50 lanes at the Second Link.

Officials also discussed tie-ups in industry and the environment, reaffirmed the progress of Iskandar Malaysia and reiterated their commitment to its continued development.