At a time when photography was primarily a man's hobby, one woman in Singapore pounded the streets, producing a series of black-and-white images celebrating the island's architectural marvels.

Among the highlights in the collection of photographs taken over two decades from the 1950s is one of people spending time at Collyer Quay.

In the photo, a man is reading a newspaper while leaning against one of the arches of Clifford Pier, while at the other end of the arch, a father and his young daughter enjoy the view of the quay and the water.

The shutterbug behind the picture was English woman Marjorie Doggett, a nurse who moved to Singapore in 1947 with her husband Victor. Both later became Singapore citizens.

The self-taught photographer's work was recently published in a book titled Marjorie Doggett's Singapore: A Photographic Record. It was launched on Nov 27 by Law and Home Affairs Minister K. Shanmugam.

Mrs Doggett, who died at the age of 89 in 2010, was also behind the first photo book on Singapore's built heritage, Characters Of Light, which was launched in 1957 and republished in 1985.

Marjorie Doggett's Singapore: A Photographic Record features a treasure trove of previously unpublished photos of the island that were largely taken between 1954 and 1957. The photos had been dug up by Mrs Doggett's only child, music teacher Nicholas, 61, who lives in Singapore, and pieced together by the book's author Edward Stokes, a photographer and photographic historian. 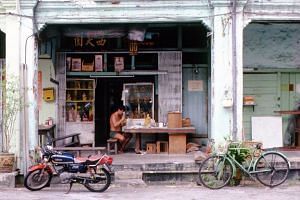 A photographer's portrait of home: Exhibition transports viewers back to post-1965 Singapore

The book's publishers, NUS Press and the Hong Kong-based Photographic Heritage Foundation, noted that the book reproduces Mrs Doggett's original negatives and prints in far greater detail, thanks to modern technology, giving readers a chance to appreciate their tonal quality and composition.

In its preface, cultural geographer Lily Kong noted that the book is a valuable record of Singapore's urban heritage.

Even though some of the buildings within its pages had already been demolished by that time, Characters Of Light drew attention to the urgency of protecting those remaining.

CULTURAL GEOGRAPHER LILY KONG, on an earlier photo book on Singapore's built heritage by Mrs Marjorie Doggett, launched in 1957 and republished in 1985.

Dr Kong said Mrs Doggett had highlighted in Characters Of Light that the city was home to a precious heritage and that urban renewal - then driven by an ethos of demolish-and-rebuild - was not the only approach to urban management.

Dr Kong said: "Even though some of the buildings within its pages had already been demolished by that time, Characters Of Light drew attention to the urgency of protecting those remaining."

Mrs Doggett was a specialist in light play and composition. She also sought out vantage points to capture architecture at its finest.

For instance, she positioned herself on the upper floor of Victoria Concert Hall in 1955 to snap a rare image of Empress Place featuring the Dalhousie Obelisk - the island's first public monument, built in 1850 - the Fullerton Building and the Bank of China building, among other things.

Mrs Doggett's tool of choice was a Rolleicord square-format camera.

Born in Southampton in England, she picked up film development and printing from a chemist as a teenager. During World War II, she trained as a nurse at the Royal East Sussex Hospital.

In Singapore, she took on various jobs including that of a postnatal adviser for Nestle, while her husband worked as a music teacher and later opened the Victor Doggett Music Studios, which is still around today.

The new book notes that she made an improvised darkroom to develop her images. While living in Amber Road, she blacked out one of the bedrooms at home. In the book, her son recalls: "She used to develop and print in the mornings, then open all the windows and doors to ventilate the bedroom."

Mrs Doggett was inducted into the Singapore Women's Hall of Fame in 2017 for her advocacy work with animals, and was a founding member of the Society for the Prevention of Cruelty to Animals.

A version of this article appeared in the print edition of The Straits Times on December 10, 2019, with the headline 'Singapore in 1950s - through lens of an English woman'. Subscribe
Topics:
More
Whatsapp Linkedin FB Messenger Telegram Reddit WeChat Pinterest Print Purchase Article Copy permalink