SINGAPORE (THE NEW PAPER) - From Singapore Idol to entrepreneur to Grab driver.

Hady Mirza, whose voice captivated local audiences in 2006, was also reportedly involved in youth work in 2013, having co-founded local group FRHM Youth, an organisation that promotes Muslim education and way of life among young people.

But it appears that the former idol has fallen from grace and into trouble with the law.

The New Paper has learnt that the 38-year-old, whose real name is Muhammad Mirzahady Amir, was recently arrested for suspected drug offences.

According to sources, the winner of the second season of Singapore Idol was seen in the Changi Prison Complex about a month ago. However, the exact circumstances of his arrest remain unclear, and attempts to contact Hady have been unsuccessful.

In January, Hady was reported to be a Grab driver, after screenshots of a customer's booking were shared online.

He was also previously running a home-based chilli tempeh snack business under the name Tempting Trading, which he set up in 2016.

However, a business search showed that the company licence has since been cancelled, after its business registration was not renewed in May.

Further records show that he was also struck off as the director of FRHM Youth in 2014.

Hady, who captured the hearts of many music fans, had gained regional attention after winning the first Asian Idol title in 2007 following his Singapore Idol win, and the first of his two albums had gained platinum status, topping charts here.

His greatest hits include his single You Give Me Wings and a rendition of George Michael's Freedom! '90.

He was also nominated at least five times at the Anugerah Planet Muzik, an annual awards ceremony honouring talent in the regional Malay music industry.

A spokesman for Artiste Networks, a subsidiary of Hype Records, said it was "dismayed" when told of Hady's situation. 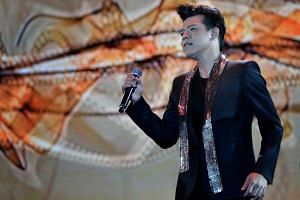 "The management contract between Hady Mirza and Artiste Networks ended many years ago and we have not been in touch with Hady since then," she said.

"During the contractual period, we have always known Hady to be a good-natured individual."

Hady reportedly tied the knot in 2014 with Malaysian Nurjannah Nur Wahid, who is 13 years younger than him.

He also told TNP in 2016 that he was trying to start a family and wanted three or four children.

His friend, Mr Jumari Salam, 38, an aircraft technician, said he was shocked to learn of Hady's arrest.

He said: "How come he is involved in drugs? When I last saw him about a year ago, he looked fine."

Mr Jumari added that Hady treasured his privacy and had been staying out of the limelight and focusing on his tempeh business.

"Many of us lost contact with him, and now I feel like I need to find out more about what happened," he said.