SINGAPORE - While expressing hopes that the Trump-Kim summit here will yield an outcome that "will set things on a constructive path" and eventually lead to denuclearisation, Prime Minister Lee Hsien Loong also added that resolving the conflict on the Korean Peninsula will "be a long process".

Speaking to Singapore media on the sidelines of a visit to the international media centre at the F1 Pit Building, PM Lee noted that North Korea and South Korea have been at war since 1950.

The North invaded the South on June 25, 1950, and an armistice was signed about three years later in July 1953 by North Korea, China and the United States-led United Nations Command. Today, the South and North remain technically at war.

Over the past almost-three decades, North Korea also embarked on a nuclear weapons programme, which successive US presidents, other world leaders and the UN have tried without success to pressure or cajole the country into scrapping.

PM Lee said there have been numerous discussions, agreements that were broken, and mistrust and misunderstanding has built up over the years as a result.

"So you cannot wipe that all away with one meeting," he said.

"What you can hope to do is to start things moving in a positive direction... to build trust, to make further moves and to keep on progressing gradually until we reach a point where we can say well, the nuclear problem is no longer urgent, and CVID (complete, verifiable, irreversible denuclearisation) has taken place."

PM Lee said it will be a long process, but the summit is a "first step to turning around a situation which was heading in the wrong direction". 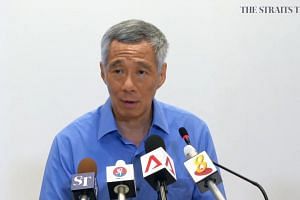 Trump-Kim summit will cost about $20m to host: PM Lee 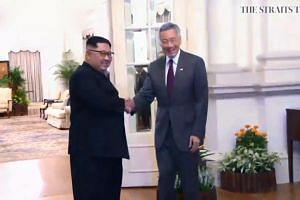 Asked what it will take for Singapore to lift suspensions on trade with North Korea, the prime minister said this will depend on UN Security Council resolutions.

Singapore was North Korea's seventh largest trading partner in 2017, before it suspended all trade with the North in November that year in line with toughened sanctions imposed by the United Nations Security Council. Statistics on trade between Singapore and North Korea are not readily available.

"Of course if there's an agreement, if there's progress, the sanctions are lifted, I expect our trade will grow," said PM Lee. "And we used to have some trade with them so there is some potential, but it will take some time."

Asked what he intends to raise and discuss during the meetings with both leaders, PM Lee replied: "I think they will be focused on their bilateral meeting. My meeting with them is a courtesy call, and I will of course hear what's on their minds, and I will tell them that they have our full support to make this a successful meeting."