SINGAPORE - Live music will be allowed for next year's Thaipusam street procession for the first time in more than four decades.

The Hindu Endowments Board (HEB) and the police said on Wednesday (Dec 2) that musicians, who have been given approval, can play specified traditional instruments at three points along the route.

The instruments are the nadhaswaram clarinet, a barrel shaped drum called the tavil, and the urumi melam or Indian drum.

The decision to relax the rules comes after 10 feedback sessions conducted by the board with 116 members of the Hindu community over a period of two months, ending in April.

All participants shared that music is important to the festival with 65 per cent wanting traditional auspicious Indian instruments to be part of the religious event. Some also suggested that live music be played at strategic locations along the 3km route which starts at the Sri Srinivasa Perumal Temple in Serangoon Road and ends at the Sri Thendayuthapani Temple on Tank Road.

A ban has been in place since 1973 that restricts the playing of musical instruments due to a history of rivalry and fights between competing groups which disrupted the procession. The authorities allowed music to be transmitted over broadcast systems at several designated points along the procession since 2012. Despite the ban, devotees have been playing instruments on the streets over the years. 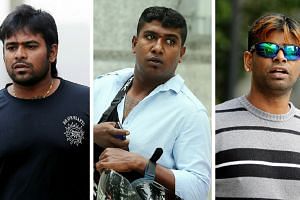 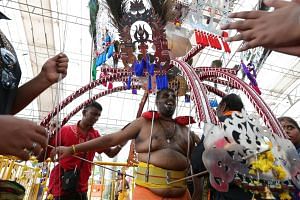 Shanmugam addresses questions over ban on playing music at Thaipusam

HEB chairman Mr R. Jayachandran described the Government's acceptance of the board's recommendations as a "historical first step". "It shows that the authorities are taking the concerns and needs of the community seriously," he said.

The police have also added another four points, on top of the existing three, for the transmission of music over broadcast systems for next year's procession.

Thaipusam is celebrated in honour of Lord Subramaniam, also known as Lord Murugan, who represents virtue, youth and power, and is the destroyer of evil. Devotees seek blessings and fulfil their vows by carrying kavadis - structures of steel and wood - with sharp body piercings.

The procession here is organised by the HEB, a statutory body, the Sri Thendayuthapani Temple and the Sri Srinivasa Perumal Temple.

Mr Mu Mu Muthiah, 79, the chairman of the Sri Thendayuthapani Temple, added: "If everyone cooperates, the rules might be relaxed even further."

During Thaipusam in February, three men were arrested for their disorderly behaviour after another group was told to stop the use of traditional drums at the behest of organisers.

The police said on Wednesday that its priority is "to ensure public safety and maintain law and order" and that the festival, which usually stretches beyond 26 hours, presents unique challenges as it draws 10,000 devotees and thousands of onlookers to the streets.

All religious foot processions were banned in Singapore in 1964 in the wake of race riots that year. But Hindus were given an exemption and have been allowed three processions on major roads - Thaipusam, Panguni Uthiram and Thimithi.

On the authorities' implementation on their suggestions, Mr R . Jayachandran said: "It's about balancing religious sanctity with security concerns. It's a happy ending."