SINGAPORE - Singapore's Ministry of Foreign Affairs (MFA) has rebutted reports that an "Asean foreign ministers special taskforce" will be going to Myanmar later this month to discuss the quickest way to help Rohingya refugees return home.

"There is no 'special taskforce'," a MFA spokesman said on Wednesday (Oct 24) in response to media queries.

"Asean is ready to assist Myanmar to commence the voluntary and safe repatriation of refugees, as soon as possible, pursuant to the Arrangement on Return of Displaced Persons from Rakhine State between Bangladesh and Myanmar signed in November 2017," the spokesman added.

Mr Saifuddin was reported saying among the actions expected to be implemented by the special task force was to set up a monitoring team to ensure the safety of the Rohingya community in Myanmar.

Another Bernama report on Tuesday cited Mr Saifuddin as saying Dr Balakrishnan and Thai Foreign Minister Don Pramudwinai would go to Myanmar at the end of the month to discuss the matter, with repatriation expected to begin early next year.

More than 700,000 Rohingya have fled Rakhine state for Bangladesh since a crackdown on the minority began in August 2017. 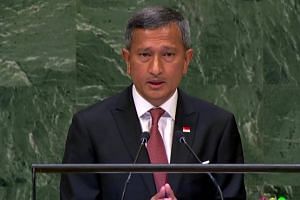 Fellow Asean members and the international community have raised the issue with Myanmar, including when Asean foreign ministers met in New York in September.

Dr Balakrishnan had said a key point was that fellow Asean members "stand ready to help", and that Asean will work with Myanmar to facilitate the safe and dignified repatriation of refugees.

The Rohingya crisis is likely to be discussed at the upcoming Asean and East Asia Summits in Singapore in mid-November.

Separately, on Tuesday, Dr Balakrishnan spoke with US Secretary of State Mike Pompeo over the phone. The MFA spokesman said Dr Balakrishnan welcomed the upcoming visit by US Vice-President Mike Pence to Singapore next month, his first as vice-president, and his attendance at the Asean-US Summit and East Asia Summit.

"Both sides also discussed areas of bilateral cooperation and exchanged views on international and regional developments."

The US State Department added that both ministers "also discussed Asean's central role in the Indo-Pacific Strategy and opportunities for further enhancing bilateral and regional cooperation".