SINGAPORE - Customers here will be able to choose their electricity retailers starting from November, in an expansion of the open electricity market that launched in Jurong this April.

By May next year, 1.4 million more households and business accounts will be able to buy electricity from 12 different retailers, the Energy Market Authority (EMA) announced on Friday (Sept 21).

The nationwide launch will be rolled out progressively in four stages, according to postal codes. Those that begin with the numbers 58 to 78 will be the first to choose on Nov 1.

Before the roll-out, which will impact 350,000 accounts in each phase, consumers will receive a notification package and information booklet.

EMA director for market development and surveillance Dorcas Tan said that the zonal roll-out was to ensure that retailers and the authorities would be able to focus their resources and fix issues that come up.

There is no deadline for switching and it is not compulsory for households to do so. Consumers can choose to stay with SP Group.

EMA chief executive Ngiam Shih Chun said: "Jurong residents benefited from more choice and flexibility. Those who switched paid an electricity rate which was, on average, about 20 per cent lower than the regulated tariff."

He said that more than 30 per cent of eligible accounts in Jurong switched their electricity retailer, which surprised the EMA, as the take-up rate in other parts of the world tended to be in the single digits.

"This is all about choice," said Mr Ngiam, adding: "We now hope to bring the benefits of competitive pricing and innovative offers to the rest of Singapore."

Speaking at the launch, Minister for Trade and Industry Chan Chun Sing said that after opening the electricity market to businesses, and following the Jurong pilot, the rest of Singapore is now ready for liberalisation.

"We have done this carefully and progressively, and have collated our experiences to make sure that when we roll-out the market to the rest of the country, we will face the least problems." 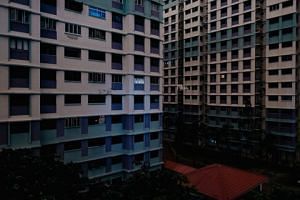 Singapore's core inflation rises to 1.9% in July due to spike in electricity and gas prices

Four retailers who took part in the Jurong pilot - Diamond Electric, Red Dot Power, Sun Electric, and Sunseap - will not be part of the nationwide launch.

They have various reasons for this, including the reassessment of their business plans and focusing on developing certain products or platforms.

However, they will continue honouring the contracts to the 500 or so accounts they now have in Jurong. They will also be able to take part in the open electricity market at a later point.

The 26-year-old, who lives in an executive condominium with four roommates, said: "I have seen savings of up to 25 per cent off my monthly electricity bill since switching to Keppel Electric. The open electricity market brings about opportunities for both consumers and businesses to have a wide variety of options."

Consumers can compare prices at http://compare.openelectricitymarket.sg

How will I be protected? And other FAQs

How do I know that my rights as consumer are protected?

The Energy Market Authority (EMA) has created a consumer advisory, and all retailers must make sure you acknowledge the document before they proceed with the switch. Retailers also need to safeguard each household’s security deposits.

You can also approach the Consumers Association of Singapore (Case) during disputes with the retailer.

Will I be deluged with marketing calls?

Retailers are banned from door-to-door marketing, or from giving unsolicited calls or messages. For greater assurance, you can register with the Do Not Call Registry.

How is it possible for retailers to charge lower rates?

The regulated tariff reflects the long-term costs of producing electricity in the market (including fuel costs), while the retailers' rates reflect the short-term costs that depend on current market conditions and the varying levels of competition.

An analogy is property. The price one pays for property is typically stable across the loan period, while the market rate of renting out the same property will depend on the demand and supply in the housing market.

It depends. The factors on which retailers set their rates (for example, electricity demand and supply levels, and competition fierceness) may vary over time.

There is no guarantee that the electricity rates they offer will remain at current levels.

That said, those who switched retailers in the Jurong pilot paid an electricity rate that was, on average, about 20 per cent lower than the regulated tariff.

SP Group will continue to read meters once every two months, so it will estimate the meter readings for billing purposes.

What if a retailer suddenly pulls out from the open electricity market?

Your electricity supply will not be disrupted. You will continue to receive power through the national grid operated by SP Group.

Who are the retailers?