SINGAPORE - The Republic continues to rank world No. 1 in the area of order and security, according to the 2019 Rule of Law Index compiled by the World Justice Project (WJP), an independent advocacy group based in the United States.

Order and security is measured by how well a society ensures the security of persons and property. This standing comes despite there being more countries assessed, from 113 in the previous report (2017-2018 Rule of Law Index) to 126 in this year's evaluation, released online on Thursday (Feb 28).

Singapore also ranks 13th globally in rule of law, beating other jurisdictions such as Japan, which came in 15th; Hong Kong, 16th; and South Korea, 18th.

The index is a measure of how the rule of law is experienced and perceived in practical, everyday situations by people across the globe, and is the world's leading source for original, independent data on rule of law.

Singapore had received the same global ranking last year, after falling four places from its position in 2016.

Globally, the top three places went to Denmark, Norway and Finland, while the Democratic Republic of Congo, Cambodia and Venezuela rounded off the bottom.

The ratings are based on data collected from more than 120,000 households and 3,800 expert surveys in 126 countries. 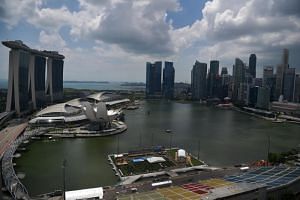 Performance is measured using 44 indicators across eight primary rule of law factors, each of which is scored and ranked globally and against regional peers. The factors include things such as absence of corruption, fundamental rights plus order and security.

Regionally, Singapore came in third for overall rule of law among 15 countries in the East Asia and Pacific Region, remaining in the same position as the previous year. New Zealand came in first, and Australia was second.

Singapore, however, topped the region in absence of corruption, regulatory enforcement, civil justice and criminal justice.

According to the WJP, this year's index has shown that more countries declined in overall rule of law performance, continuing a negative slide towards weaker rule of law around the world.

The group cautioned that the factor score for constraints on government powers declined in more countries than any other factor worldwide over the last year, which suggested rising authoritarianism.

Constraints on government powers measure the extent to which, in practice, those who govern are bound by governmental and non-governmental checks such as an independent judiciary, a free press, the ability of legislature to apply oversight, and more.

Overall, 61 countries saw their scores drop in this area, while 23 countries stayed the same and 29 saw an improvement.

"This slide in rule of law in general and checks on government powers in particular is deeply concerning," said WJP executive director Elizabeth Andersen.

She added: "There is a crucial difference between 'rule by law' and 'rule of law'. In too many countries, laws and legal institutions are being manipulated to undermine rather than uphold the rule of law, even as governments wrap their actions in 'rule of law' rhetoric."

Agreeing, lawyer Chia Boon Teck said this is an area that democratic governments should check themselves on regularly to gain their people's trust.

Singapore's ranking has not changed significantly, which showed that its standards are fairly consistent, he said. He, however, highlighted three areas where the index showed that Singapore could improve on - constraints on government power, fundamental rights, and open government.

"Singapore's placing is decent but, as always in all things, there is room for improvement," he said.

WJP chief executive and founder William H. Neukom said that while no jurisdiction has achieved a "perfect realisation" of the rule of law, the index intends to be a "first step" to set benchmarks and enable a deeper appreciation and understanding for the "foundational importance of the rule of law".

He added: "Effective rule of law is the foundation for communities of justice, opportunity, and peace."