On Friday (Nov 6), President Xi Jinping and his wife Peng Liyuan will make their first state visit to Singapore.

In many ways, the ties between Singapore, a city-state of 5.5 million, and China, a behemoth with 1.4 billion people, have been unique.

Here are seven things about the two countries' relationship.

Singapore and China established diplomatic relations on Oct 3, 1990 at the United Nations complex in New York.

Then Foreign Minister Wong Kan Seng and his then Chinese counterpart Qian Qichen signed a short communique and shook hands in a simple ceremony.

Mr Wong said then that the agreement would simply formalise existing relations between Singapore and China, which were already warm.

With its majority Chinese population, Singapore had to be sensitive to the perception of its neighbours. 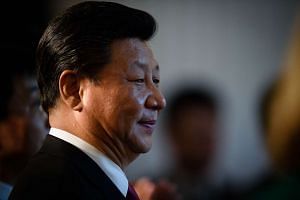 To avoid being labelled a "third China", Singapore wanted to be the last of the original five Asean nations to normalise diplomatic relations with China. Malaysia was the first to do so in 1974, and Philippines and Thailand followed in 1975.

Indonesia, in particular, had a difficult relationship with China. Ties were severed in 1967 after Jakarta accused Beijing of complicity in an abortive communist coup attempt.

Indonesia resumed formal relations with China in August 1990, after Beijing pledged not to interfere in Indonesia's internal affairs.

Way before 1990, the friendship between the late Mr Lee and China patriarch Deng Xiaoping set the tone for Singapore-China ties.

Mr Lee called the diminutive Chinese leader "a giant among men", while Mr Deng had Singapore on his mind when he designed his economic reforms.

When Mr Deng made his famous "southern tour" to spur futher economic reform in 1992, he said: "Singapore's social order is rather good. Its leaders exercise strict management. We should learn from their experience, and we should do a better job than they do."

A year after ties were formalised, Singapore sent its first ambassador to China. Mr Cheng Tong Fatt was in China for seven years. Before becoming a diplomat, he was permanent secretary of the Ministry of Culture.

The respective trade representatives' offices, set up in September and October 1981, were upgraded to embassies.

By 1979, Mr Lee Kuan Yew and Mr Deng had signed a trade agreement and trade representative offices were set up in 1981 to strengthen economic links between the two countries.

There are two state-led projects. The Suzhou Industrial Park (SIP), launched in 1994, was the flagship government-level project.

The park, based on Singapore's Jurong industrial estates, was built to attract foreign investors into Suzhou. It suffered losses in the initial years as Suzhou officials promoted a rival industrial park owned by the municipal government.

Singapore cut its stake in the SIP from 65 per cent to 35 per cent in 2001, and it began making money that same year.

The second joint venture was the Tianjin Eco-City, which broke ground in 2008. The project, started to create a sustainable model for urban living, was home to some 30,000 residents as of August 2015.

It suffered superficial damage to its buildings during deadly explosions at a chemical warehouse 16km away in August.

Pandas Kai Kai and Jia Jia created a stir when they arrived in Singapore in 2012. They are on a 10-year loan from China. The loan, announced in 2009, was to mark 20 years of diplomatic ties between the two nations.