China and Singapore have agreed to revise a defence pact, which could include larger-scale military exercises and frequent high-level dialogues, as part of efforts to deepen defence ties and cooperation.

The revised Agreement on Defence Exchanges and Security Cooperation, expected to be signed later this year, could also include new arrangements for services-to-services cooperation and the establishment of academic and think-tank exchanges.

The announcement came after a bilateral meeting yesterday between Defence Minister Ng Eng Hen and his Chinese counterpart Wei Fenghe, who is making his introductory visit to Singapore.

During the meeting, both ministers agreed on a substantial programme to deepen defence ties and step up bilateral engagements on various fronts, said a Ministry of Defence (Mindef) statement. This included an agreement for Exercise Maritime Cooperation by both navies to be held next year, which will be the second such exercise.

They also welcomed Exercise Cooperation between the two armies this year, which will be the fourth in the series.

"Both ministers also agreed to revise the Agreement on Defence Exchanges and Security Cooperation between Singapore and China, which was first signed in 2008," said Mindef.

"The proposed exchanges to be introduced or stepped up include the establishment of frequent high-level dialogues, new arrangements for services-to-services cooperation, academic and think-tank exchanges, as well as an increase in the scale of existing bilateral exercises." 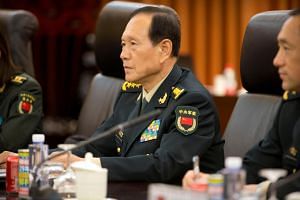 Asked about the significance of the proposed revision coming at the current time, Dr Ng said it was "not meant to be a bellwether of anything".

"If anything, it reflects bilateral confidence in each other, and the willingness to deepen defence ties, particularly because we have shared perspectives for a stable and inclusive region, especially for security matters," he told reporters after the meeting.

He also said that there was no planned signing of the agreement yesterday, contrary to what a reporter had suggested. "Because we were meeting today - so it is not quite correct that it was going to be signed today," he said.

With a number of items being proposed, Dr Ng said there were a lot of details to go through, and officials have been tasked to do so.

The Chinese minister, who is also state councillor, is visiting Singapore from Tuesday to Sunday.

He will attend the annual high-level defence forum, the Shangri-La Dialogue (SLD), where he is due to speak on Sunday. His attendance this year will make him the highest-ranking Chinese official to attend the SLD since 2011, when former defence minister Liang Guanglie spoke at the event.

The first Agreement on Defence Exchanges and Security Cooperation was signed by Mindef and the People's Liberation Army (PLA) on Jan 7, 2008. 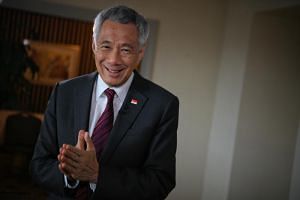 It formalised ongoing activities between Mindef and the PLA, such as the exchange of visits, attendance at courses and seminars, and port calls.

Yesterday, both ministers also discussed regional security and practical ways in which the Asean Defence Ministers' Meeting-Plus could build confidence between militaries and prevent conflict.

Tomorrow, he will visit the headquarters of the 3rd Singapore Division, which will host Exercise Cooperation later this year.

Mindef said Gen Wei's visit underscores the longstanding, warm and friendly defence relations between both sides that have deepened and grown over the years.

Chinese Defence Minister Wei Fenghe being received by Singapore's Minister for Defence Ng Eng Hen at the Ministry of Defence yesterday. During their bilateral meeting, they agreed to deepen defence ties and revise a defence pact signed in 2008. General Wei is in Singapore on an introductory visit and to attend the Shangri-La Dialogue, where he is expected to speak on Sunday.