Singapore can continue to play a constructive role after hosting the historic United States-North Korea summit, and has strengths that "will be of great help in materialising" the denuclearisation of the Korean peninsula, South Korean President Moon Jae-in said this week.

In a written interview with The Straits Times as he began his first state visit to Singapore, Mr Moon stressed the importance of building trust on all sides, and sought close cooperation with Singapore and other countries in the global community to maintain the dialogue momentum and implement the agreements made among the leaders.

He also expressed his heartfelt appreciation on behalf of Koreans to Singapore's Government and its people for their excellent support for the success of the June 12 summit between US President Donald Trump and North Korean leader Kim Jong Un. He said of Singapore: "I was deeply impressed by the devotion and the sense of responsibility they showed in the process."

He said the US and North Korea settled on the summit venue "because they had trust in Singapore".

Noting that Singapore has also been constantly communicating with both Koreas and the US, and is Asean chair this year, he said: "Such strengths of Singapore will be of great help in materialising the complete denuclearisation of the Korean peninsula and the settlement of permanent peace. I am looking forward to Singapore's constructive role going forward."

His visit comes as the US and North Korea struggle to iron out details of the broad agreement inked by their leaders in Singapore to work towards complete denuclearisation of the Korean peninsula.

North Korea's Foreign Ministry issued a statement after a visit by US Secretary of State Mike Pompeo last week expressing regret and blasting the US for its "unilateral and gangster-like demand for denuclearisation... which runs counter to the spirit of the Singapore summit". 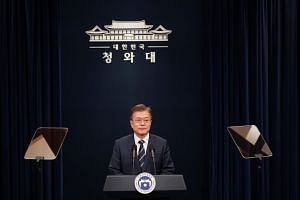 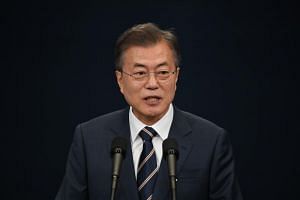 Mr Pompeo dismissed the accusations and insisted the talks were productive. He was backed by Mr Trump, who tweeted he had "confidence that Kim Jong Un will honour the contract we signed and, even more importantly, our handshake".

Mr Moon, in his interview with ST, stressed that the tensions between the US and North Korea have persisted for nearly 70 years, since the 1950-53 Korean War, and "cannot be resolved in just one stroke".

He said the Korean peninsula is now "witnessing a great historic transition", adding: "The course of history has now turned away from war and towards peace." But while both Koreas and the US have taken a joint first step, what matters most, he added, is devising concrete plans to put into practice the agreements made among the leaders.

"The North needs to flesh out its implementation plans for denuclearisation, while South Korea and the United States have to swiftly carry out corresponding comprehensive measures. To this end, trust is of paramount importance."

Mr Moon acknowledged that the controversial decision to suspend joint military drills between South Korea and the US was a move to build trust and keep the dialogue going.

But he gave the assurance that the US forces stationed in the South are "an entirely different issue" and "not a subject for discussion" in negotiations for denuclearisation. "Both South Korea and the United States have a firm stance on the role and importance of US forces in South Korea in regard to peace and prosperity on the Korean peninsula and in North-east Asia."

Mr Moon said talks are under way to discuss the timing and format of a declaration to end the Korean War this year. "I believe that if the two Koreas can restore a sense of community among the Korean people while coexisting and mutually prospering on a peaceful peninsula, the door to unification will open naturally."

A version of this article appeared in the print edition of The Straits Times on July 12, 2018, with the headline 'S'pore can continue to help in bid to denuclearise Korea: Moon'. Subscribe
Topics:
More
Whatsapp Linkedin FB Messenger Telegram Reddit WeChat Pinterest Print Purchase Article Copy permalink