SINGAPORE - An overall budget surplus of $2.1 billion is expected for the 2018 financial year, a $2.7 billion increase from the $600 million deficit that was forecast a year ago.

The fiscal boost was due to the unexpected two-year suspension of the Kuala Lumpur-Singapore High-Speed Rail (HSR) project and higher-than-expected stamp duty collections.

A $2.1 billion surplus is equivalent to about 0.4 per cent of Singapore's gross domestic product. It is much lower than the $10.86 billion achieved in the 2017 financial year.

If the Government's top-ups to endowment and trust funds and the Net Investment Returns Contribution are excluded, a basic deficit of $7 billion is expected for 2018.

Revenue is expected to come in at $73.7 billion, a $1 billion increase over earlier budgeted estimates.

This is mainly due to higher collections from statutory boards' contributions, corporate income tax, stamp duties and other taxes, but the increase was partially offset by decreases in vehicle quota premiums, and customs and excise fees. 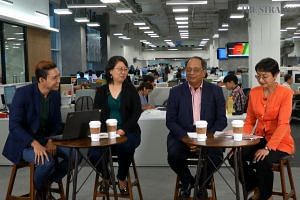 $1.1b Bicentennial Bonus for Singaporeans

Owing to lower-than-projected certificate of entitlement (COE) prices and higher disbursements of COE rebates, revenues from vehicle quota premiums are estimated to decrease by $2.3 billion to $3.3 billion - a 41.4 per cent fall.

Total expenditure for the 2018 financial year ending March 31 2019, is revised downwards by $1 billion to $79 billion. This exceeds the actual expenditure the year before by $5.4 billion, owing to more being spent in defence, home affairs, transport plus trade and industry, among others.

While operating expenditure was revised upwards by $1 billion, development spending is expected to be lower, by $2 billion, against an earlier estimated sum .

The main factor is the suspension of the HSR project and rescheduling of works for some public housing projects. Partially offsetting it is the higher requirements for the Research, Innovation and Enterprise 2015 Plan, and the Economic Development Assistance Scheme.

The Net Investment Returns Contribution is projected to be $16.4 billion.

The latest 2019 Budget remains expansionary, with the basic deficit forecast to reach $7.1 billion.

Higher spending in healthcare, defence, and the environment and water resources will be offset by lower transport expenditure, owing to factors that include the suspension of the HSR project.

The Government is also setting aside funds to meet long-term needs, including $6.1 billion for the Merdeka Generation Package and $5.1 billion for long-term care support. On the whole, an overall deficit of $3.5 billion is projected for the 2019 financial year.

"We have sufficient fiscal surplus accumulated over this term of government to fund the overall deficit in 2019. There is no draw on past reserves," Mr Heng said.