"Singapore adheres to the fundamental principles of universality and equity for NS. All Singaporeans are expected to fulfil our NS obligations as citizens," MFA stated in a written reply to Jurong GRC MP David Ong's question in Parliament.

"It would not be fair to allow citizens to avoid NS just because they reside overseas."

Mr Ong had wanted to know if the ministry had entered into discussions with New Zealand on the case of Mr Smith, who holds dual citizenship and had previously stated his desire to seek exemption from NS.

The 19-year-old, whose mother is Singaporean and father a New Zealander, moved to the city of Dunedin at the age of eight. He has had multiple applications to defer his NS call-up until he turns 21 - the age when he can relinquish his Singapore citizenship - rejected.

He told New Zealand news site stuff.co.nz in an interview on Jan 24 that spending two years doing NS was "pointless" as he did not speak Mandarin and would feel like an outsider. 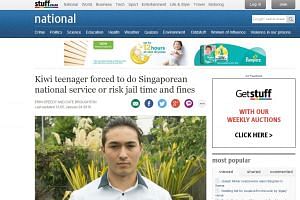 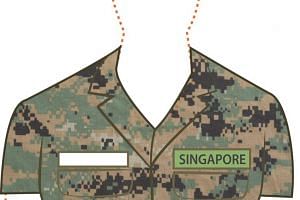 But MFA has clarified that Mr Smith would still be liable for any breaches of the Enlistment Act, even if he were to apply for renunciation of his Singapore citizenship after attaining the age of majority.

The ministry also advised him to return to Singapore as soon as possible to resolve the matter.

Mr Smith faces a fine of up to $10,000 and/or a maximum of three years in prison if he fails to comply.

MFA said the New Zealand Ministry of Foreign Affairs and Trade had made a request for Singapore to provide a contact from the Ministry of Defence, which MFA has done so.

New Zealand's Minister of Foreign Affairs Murray McCully said in a statement on Jan 23 that he intended to take the matter up.

"While the Singapore Government is responsible for determining their own citizenship policies, I have considerable sympathy for the situation this family has found themselves in," Mr McCully said.

Last month, Singaporean Brian Joseph Chow was jailed for 1½ months after an appeal by the prosecution against his original sentence of just a $4,500 fine.

Chow, 25, had left the country at the age of 14 to study in Australia and evaded enlistment for more than six years before voluntarily returning in May 2013 to serve.