SINGAPORE - Singaporeans can look forward to new sources of pork and herbal teas among other products, thanks to eight agreements inked between Singapore and Sarawak.

One of the agreements signed on Friday (Aug 16) at the inaugural Sarawak-Singapore Business Forum and Expo will see the Republic import nearly 130,000 live pigs from the East Malaysian state by 2022.

The managing director of Asia Feed Mills, Mr Lim Keng Huan, whose company is involved in the setting up of the pig farm in Sarawak, said: "We plan to export 80 per cent of our live pigs to Singapore, with the rest going to the local market in Sarawak. The huge investment of around US$40 million (S$55.5 million) will also go into investments in land and European technology."

Currently, one farm each in Indonesia (Pulau Bulan) and East Malaysia (Sarawak) are accredited to export live pigs to Singapore. The pigs are slaughtered in Singapore and sold as chilled pork.

When the farm is completed, the Singapore Food Agency will work with the Malaysian authorities on its accreditation to ensure that it meets import requirements.

In a speech at the opening of the expo, held in conjunction with the opening of the Sarawak Trade and Tourism Office in Singapore (Statos), Trade and Industry Minister Chan Chun Sing told Sarawak Chief Minister Datuk Patinggi Abang Johari Openg and other guests present that Sarawak can use Singapore as a platform to sell its products to the region and the rest of the world.

"As Singapore seeks to diversify our supply chains and sources of food, there is tremendous potential for us to tap on Sarawak," he said.

Singapore is one of Sarawak's key trading partners. The state's exports to Singapore in 2018 totalled RM1.2 billion (S$398.5 million). Statos deputy chief executive officer Putrie Rozana hopes that with the decision to open the office in Singapore, tourism from Singapore to Sarawak will increase by 30 per cent.

Mr Chan noted that initiatives such as the expo and trade and tourism office demonstrate both sides' commitment to strengthen ties, in spite of the global pushback against trade and integration.

He said: "Working together in the region can act as a buffer against the uncertainties of the world... business relations start from the basis of trust, and all trust starts from the basis that we know each other, not just as business partners but as friends." 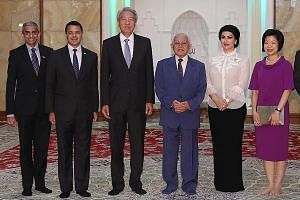 These relations, he added, can be furthered through collaboration in areas such as tourism development and agricultural trade.

One such collaboration between Singapore start-up Zoe Botanicals and the Sarawak Biodiversity Centre will develop herbal products such as diabetic teas.

Under a memorandum of understanding signed on Friday, the centre will supply Zoe Botanicals with high-quality plant materials to produce Borneo Blend, a mix of tropical herbs which the company claims can control blood sugar. Both sides will also conduct joint research and development.

Zoe Botanicals' chief executive Jason Poh told The Straits Times that the company aims to differentiate itself through research and clinical collaboration. It is supported by the National University of Singapore Graduate Research Innovation Programme, which taps graduate students, post-doctoral researchers and staff to establish and run start-ups using technology.

The company is seeking funding to validate its product, and is in talks with the Singapore General Hospital and NTUC FairPrice to sell it in Singapore.

The one-day business forum and expo, held at the Suntec Singapore Convention and Exhibition Centre, was attended by over 800 business representatives and Sarawak exhibitors in industries such as food and beverage, digital media, crafts and tourism.