Mr Goh referred in a Facebook post on Thursday (March 21) night to Malaysian Prime Minister Mahathir Mohamad's remarks that both countries must be connected by three or four more bridges to ensure smoother traffic flow.

"Mahathir wants to build more bridges between Malaysia and Singapore. Their cost-benefits should be studied," Mr Goh said.

"In the meantime, let us start building more political, goodwill bridges between leaders, Members of Parliament and our two peoples."

He noted that Singaporeans and Malaysians have grown increasingly apart since Separation in 1965, and successive generations will find each other more unfamiliar.

"I favour closer and stronger links between Malaysia and Singapore, both physical and political," Mr Goh said.

"We are neighbours, and forever will be," he added. 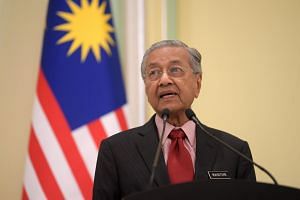 Do Singapore and Johor need a third link?

During the Invest Malaysia conference in Kuala Lumpur on Tuesday, Tun Dr Mahathir spoke of how Penang is planning to have a third link to mainland Peninsular Malaysia.

He added that Singapore traffic is much bigger than Penang's, and that he did not understand why Singapore does not want any more bridges.

Both countries are linked by the Causeway at Woodlands and the Second Link at Tuas.

In his first stint as prime minister, Dr Mahathir had mooted the idea of a crooked bridge to replace the Causeway. The project - which would see a six-lane S-shaped highway for vessels to pass under - was dropped by his successor Abdullah Badawi.