SINGAPORE - Defence Minister Ng Eng Hen and his Malaysian counterpart Mohamad Sabu agreed to strengthen existing bilateral defence ties during a meeting on Sunday (June 3) on the sidelines of the Shangri-La Dialogue (SLD), according to Singapore's Ministry of Defence.

It was the first official meeting between the two, on Mr Mohamad's inaugural visit to Singapore as Malaysian Defence Minister.

Dr Ng and Mr Mohamad affirmed the warm and long-standing defence relations between Singapore and Malaysia, Singapore's Ministry of Defence said in a statement.

The ministers noted the good progress made in bilateral defence relations, such as the recent conduct of a new exercise between the two Air Forces.

In addition, Dr Ng and Mr Mohamad affirmed both countries' cooperation in various regional multilateral platforms, such as the Asean Defence Ministers' Meeting (ADMM) and the ADMM-Plus, and the Five Power Defence Arrangements (FPDA).

They also discussed regional challenges such as the situation in the Rakhine state, according to the statement.

Singapore and Malaysia's defence establishments interact regularly across a wide range of activities, which includes bilateral exercises, visits and exchanges, cross-attendance of courses, as well as multilateral activities. 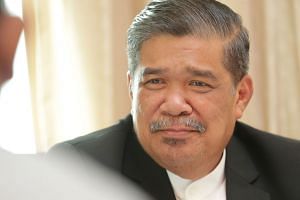 These regular interactions strengthen mutual understanding and professional ties among the personnel of both defence establishments, and underscore the warm and long-standing defence ties between both countries.

Mr Mohamad is visiting Singapore from Friday to Sunday to attend the SLD.