Business-class passengers on these routes will now enjoy the luxuries offered on longer-haul flights, such as fully flat beds.

With seats arranged in a 1-2-1 configuration, instead of 2-2-2, all passengers in business class will have convenient access to the aisle. The centre pair of seats in this class also has adjustable dividers so that customers travelling alone can have more privacy.

These and other amenities are part of SIA's new suite of cabin products for regional flights and were unveiled on Wednesday (March 28).

SIA last updated its business and economy seats for regional routes close to a decade ago in 2009, on the Airbus 330-300.

The refreshed cabin products are featured on SIA's new Boeing 787-10 Dreamliner, which the carrier took delivery of on Sunday from Boeing's Dreamliner production facility in North Charleston, South Carolina.

Arrival of the Boeing 787-10, Singapore Airlines’ newest and longest Dreamliner

SIA is the first airline to operate the latest variant of the Dreamliner, which is 5.5m longer than the 787-9, and can carry 14 per cent more passengers.

The plane left the United States on Monday, making a 14-hour flight to Osaka and stopping there for about two hours for refuelling and a change of crew. It then flew about six hours to Singapore, landing at 10am on Wednesday. 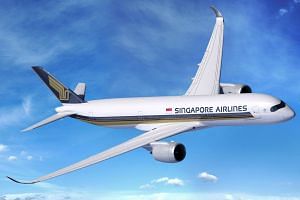 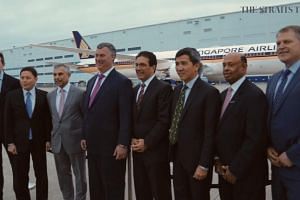 On arrival, the plane received a water cannon salute, which is reserved for significant aviation events.

SIA earlier announced Osaka and Perth as two destinations it will operate the new 787-10 on. The flights are set to begin in May.

The airline's chief executive Goh Choon Phong told The Straits Times last week that SIA was also looking at deploying the new plane on routes to Nagoya and Fukuoka.

SIA is confident the new cabin products for regional flights will help the company stay ahead in the market and woo customers, amid stiff competition from regional rivals and an overcapacity that is suppressing flight prices.

Mr Goh said: "The introduction of the new cabin products on our Boeing 787-10 fleet reinforces our unwavering commitment to product leadership, one of the key pillars of our brand promise."

He added: “The new products are the result of a series of consultations with customers, and from working closely with our seat designers and manufacturers.“