SINGAPORE - Singapore Airlines (SIA) has been beaten to the world's best airline title by Qatar Airways.

The Gulf carrier reclaimed the top spot - which it ceded to SIA in last year's edition - at the 2019 World Airline Awards in Paris on Tuesday (June 18).

"It is a proud moment for the airline as our constant innovation and service standards set the benchmark in our industry," says Qatar Airways group chief executive Akbar Al Baker.

Japanese airline All Nippon Airways came in third among the best airlines, with Hong Kong carrier Cathay Pacific and Emirates coming in fourth and fifth respectively. 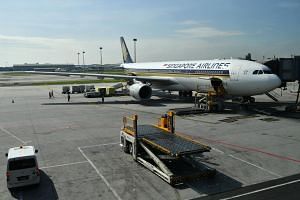 Other winners include Bangkok Airways for world's best regional airline, Philippine Airlines as the most improved airline and Star Alliance as the best airline alliance.

The World Airline Awards, organised by London-based research firm Skytrax, are among the most prestigious in the airline industry.

The rankings are based on surveys done by global travellers and more than 21 million votes were counted in this year's survey, which was operated from September 2018 to May 2019.