A pre-concert sing-along segment that started at 5.30pm featured iconic pop songs over the past 50 years:

Violinist Sandhya Saravanan, 11, performed with the Metropolitan Festival Orchestra at the concert. She told The Straits Times just before the show: "I feel very excited...I want to see all those pianists, especially Lang Lang, and all those famous singers." 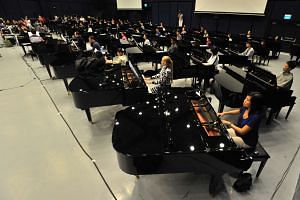 Sing50 concert to raise more than $200,000 for two children's charities 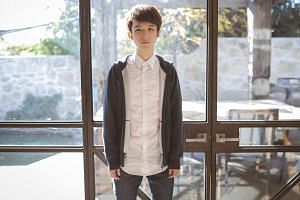 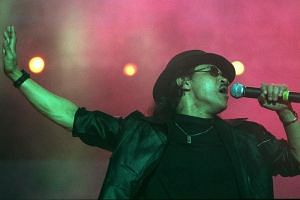 100 schools keen to apply for pianos from Sing50 Fund

The concert then stepped back a decade to classics from the Xinyao movement, which started in the 1980s. MICappella performed a series of songs written by Xinyao pioneer, Liang Wern Fook.

The stadium became awash in lights as Taiwanese vocal powerhouse Tracy Huang came on. The gorgeous Tracy Huang, 63, looked as though she had not aged since her heyday in the 1970s and 80s.

Resounding applause rang out from the audience, who cheered and lit up their mobile phones for Huang's performance. They also responded enthusiastically to Dick Lee's medley of catchy hits like Fried Rice Paradise and Rasa Sayang.

The battle of the ivories was next: JJ Lin and Lang Lang staged a fierce musical face-off, leading in to a sumptuous orchestral performance by the Metropolitan Festival Orchestra.

They played the Three Movement Concerto composed by Dr Kelly Tang that pay homage to Singapore's past, present and future. Chinese virtuoso Lang Lang led the pianists, aged seven to 52 on fifty grand pianos. The 50 pianists were chosen from more than 300 applicants.

For the grand finale of the two-hour concert, more than 1,200 singers and instrumentalists were on stage. They included the 92-strong orchestra, 50 pianists, and 1,000-strong choir and artists.

It was a great performance, the Cheong family told The Straits Times.

"I think everyone enjoyed it, (including) our family," said Manager Eric Cheong, 58, who attended the concert with his wife, administrator Irene Yeow, 50, and their children, students Cheong Yinn Shan, 20, and Cheong Hao Shaun, 15.

Another audience member, Ms Lily Soh, 52, said that her favourite segment was the singing of the national anthem Majulah Singapura.

"Everyone just automatically got to our feet and we sang with all of our hearts very patriotically. We really meant every word we sang," she said.

Sing50 was organised by The Straits Times (ST) and The Business Times (BT) and produced by non-profit arts-and-culture organisation The Rice Company. It was sponsored by Mapletree Investments, Resorts World Sentosa and Zurich Insurance, with support from Steinway Gallery Singapore, as a celebration of Singapore's golden jubilee.

In January this year, a new fund called the Sing50 Fund was launched with an initial purse of $348,000 to raise money from private individuals and companies to provide resources such as musical instruments, instructors and learning material to schools and students. Part of the money will be used to buy 50 Steinway-designed Lang Lang baby grand pianos at cost for schools. The organisers thought it would be worthwhile to give the pianos to schools after the concert ends, and the Sing50 Fund was created to raise money for this purpose and other music outreach efforts.

Also in January, three corporations came on board to make the concert happen. Mapletree, the concert's presenter, sponsored $1 million. Resort World Sentosa, the supporting presenter, sponsored $500,000 as well as its venue spaces to promote the concert. Insurance company Zurich pledged to donate $5 for every audience member at the concert. The proceeds will go towards children charities The Straits Times School Pocket Money Fund and The Business Times Budding Artists Fund.

More than 45,000 tickets were taken. They were sold at $20 or made available through the Mapletree-Sing50 Charity Drive at a donation of $20. Proceeds went to The Straits Times School Pocket Money Fund and The Business Times Budding Artists Fund. Some tickets were also distributed to schools and community groups.. Ticketholders who were unable to attend were encouraged to pass their tickets on so as to be able to raise as much funds for charity as possible.