SINGAPORE - Shouts and gunshots punctuated the air as three "gunmen" with black masks stormed the lobby of a Sentosa attraction and opened fire on more than 10 people.

A few minutes later, a group of officers from the Singapore Police Force's (SPF) Ground Response Force and Emergency Response Team arrived at the scene, and after a brief shootout, shot and handcuffed the "gunmen".

This was part of a simulated terror attack on Friday (Jan 26) at one of Sentosa's attractions, KidZania Singapore, part of this year's Exercise Heartbeat which aims to boost incident preparedness and response during peacetime.

The hour-long simulation involved more than 200 role players and officers from the SPF and Singapore Civil Defence Force (SCDF).

The annual exercise, which is in its 10th year, was jointly organised by the SPF, Sentosa Development Corporation (SDC) and the Ministry of Manpower, and supported by KidZania Singapore and the SCDF.

The exercise also saw the SCDF tending to the "casualties" outside the building by bandaging their wounds, attaching drips and oxygen masks to them and monitoring their pulses.

General manager of KidZania Singapore Leong Yue Weng said: "While we have detailed contingency plans in place, this joint exercise allows us to put our emergency-preparedness measures to the test and work with various agencies to fine-tune them."

Sentosa is home to more than 6,000 residents and receives 19 million visitors annually.

SDC, which oversees the development, management and promotion of the island, also organises about 50 exercises and drills every year with scenarios ranging from business disruptions to those related to safety and security. It also holds training and workshops to equip tenants, staff and residents with risk management skills against terror threats. 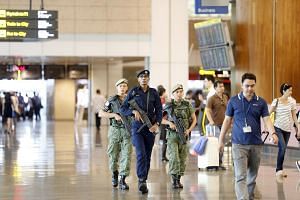 Mr Quek Swee Kuan, chief executive of SDC, said: "It is of utmost importance that we stand ready to respond effectively to any emergencies so that everyone in Sentosa has peace of mind."

MP for West Coast GRC Patrick Tay, who observed the exercise, said it is important for Home Team agencies, business stakeholders and the public to work together to tackle potential threats.

"Today's exercise is a great platform for them to come together... to raise awareness and work out some of these coordination efforts," he said.