SINGAPORE - In less than three weeks, passengers will be able to hop on a plane and get from Singapore to New York non-stop on the world's longest commercial flight.

Singapore Airlines (SIA) said on Saturday (Sept 22) that it has taken delivery of the world's first Airbus A350-900ULR aircraft from Airbus.

SIA chief executive officer Goh Choon Phong said it was a "proud moment" for the airline.

"The A350-900ULR will bring more convenience and comfort to our customers... It will help us boost our network competitiveness and further grow the Singapore hub," he said.

In its statement, SIA said the 16,700km flight will take up to 18hr 45min, and will have 67 Business Class seats and 94 Premium Economy Class seats. 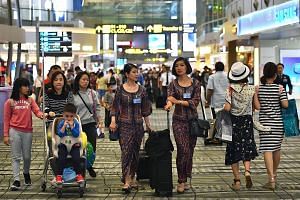 SIA takes off on transformation journey

Before 10am: SIA air stewardess up bright and early to ensure a pleasant flight

The aircraft, which is capable of travelling for over 20 hours without stopping, also comes with higher ceilings, larger windows, a wider body, quieter cabins and lighting designed to reduce jet lag.

It will also have improved air quality due to a carbon composite airframe that optimises cabin altitude and humidity levels.

Singapore's national carrier has ordered seven such planes, two of which will fly the Singapore-New York route.

The remaining five will fly non-stop between Singapore and Los Angeles from Nov 2 and increase the frequency of an existing Singapore-San Francisco route, SIA said.

Currently, SIA operates 40 US-bound flights a week to Houston, New York, Los Angeles and San Francisco. With the new flights, this will increase to 53 by December this year.

SIA previously held the title of the world's longest non-stop flight with its Singapore-Newark route from 2004 to 2013.