National carrier Singapore Airlines is the most positively perceived brand by Singaporean consumers, according to a study by British-based independent research firm YouGov.

The Straits Times ranked ninth in the same study, but was ranked third for local brands.

Other Singapore brands on the list include DBS and POSB banks.

The rankings, revealed on Monday on YouGov's Facebook page, are based on the YouGov BrandIndex's index score, which measures overall brand health.

Results were derived from a 52-week average of the index score.

BrandIndex is an online survey where 4,000 surveys are sent daily to a nationally representative sample.

This accounts for 80 to 100 surveys completed per brand per day.

The Singapore rankings were the result of 146,000 interviews conducted in the country in the past 12 months.

A total of 365 brands in Singapore were ranked based on factors such as consumers' perception of a brand's overall quality, value, impression, reputation, satisfaction and whether consumers would recommend the brand to others.

Brands which made the top 10 include global companies such as WhatsApp, Google, Uniqlo and YouTube.

The Straits Times is in the top 10 for the second year in a row, after finishing eighth last year.

DBS went up three notches from last year to No. 7, while POSB Bank slipped one position to No. 10.

Mr Amos Tan, senior lecturer in marketing and retail at Singapore Polytechnic, said consumers are likely to pick brands they are most exposed to.

"For example, you would use WhatsApp on an everyday basis, while anyone who wants to watch videos would be using YouTube," he said. "It is top-of-mind recall."

He added: "It also depends on what their experiences are with these brands and how they engage their customers."

On the presence of international brands like Uniqlo in the list, Mr Tan said: "Singaporeans are known to be very well-travelled and to embrace things of foreign origin."

Mr Lucas Tok, who is also a marketing and retail lecturer at Singapore Polytechnic, said of the local brands on the top 10 list: "The majority of Singaporeans have grown up with and trusted them for a long time.These brands resonate with Singaporeans."

There were also rankings for the most improved brands in Singapore.

This table was topped by Samsung, which saw an increase of 7.5 in its index score, followed by South-east Asian e-commerce group Lazada. 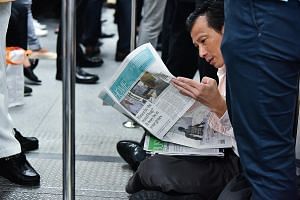 ST is No. 3 among local brands

Online grocery shopping firm RedMart came in third. It was No. 10 on the list last year.

Others in the top 10 global brands for this year include Samsung, which jumped one place from last year to third, and Facebook, which fell two places to fifth spot. Ikea, Uniqlo and Lego are new entrants to the list.