SINGAPORE - The performance of the international hit musical, Evita, now on at Marina Bay Sands, had to be cancelled about half an hour after it had begun on Tuesday night (March 6), owing to unspecified "technical issues".

"A woman was singing, and then she stopped and an announcement came on apologising for a technical fault," said the multimedia designer, 31, who had gone to the show alone.

"We waited in the theatre for about 15 minutes before an announcement came on saying there would be an intermission."

Ms Chen said the performance began about 10 minutes later than its start time of 8pm and the intermission was called at about 8.35pm. She said it was after 9pm when an usher came out to the lobby to distribute notices that it had been cancelled.

The notice apologised for the "unforeseen disruption" and offered affected theatregoers a ticket exchange or a refund. According to the Sistic website, ticket prices range from $55 to $185.

Evita, directed by Harold Prince, is being held in the 2,155-capacity Mastercard Theatres, Grand Theatre, which was about half-full, according to Ms Chen. She added that a queue of more than 100 people formed outside the box office when it was clear the show would not go on. 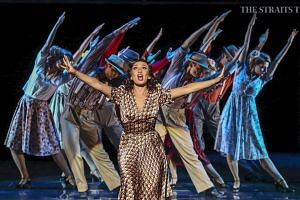 "We cannot totally blame Marina Bay Sands that something went wrong, we don't know what the fault is. But of course a lot of people were very disappointed - I am disappointed, because it was my first time watching this musical and I was really looking forward to seeing it. I even bought a souvenir T-shirt before the show started," she said.

When contacted, a spokesman for Marina Bay Sands and Base Entertainment said: "We confirm that the Evita performance on Tuesday, March 6 was stopped and thereafter cancelled due to technical issues. Affected guests will be refunded or offered tickets to the show on a different night. We apologise for the inconvenience caused."

This is the first time a cancellation such as this has had to be made for the musical, which began its run on Feb 23 and ends March 18. The Straits Times understands that audience members who want to know if future shows will be affected - including Wednesday's performance - should call the Marina Bay Sands Theatre Box Office.